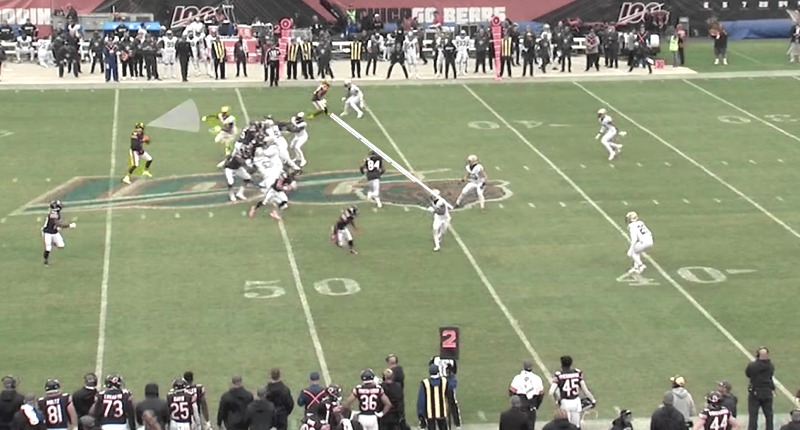 And while it has been a rough go for the embattled Bears quarterback, he showed some flashes last Sunday while working with his top receiver and against blitzes.

Take a few moments to watch how Trubisky and Robinson both make the right reads and proper reactions to blitzes, resulting in positive gains:

Can you watch the video above without yelling at your computer (or mobile device) and wondering where that version of Mitch Trubisky has been this season? Because, in all honesty, I can’t.

In the first snippet, Trubisky does all the right things in identifying the blitz, sliding protection, reading the pass-rushing defenders, knowing where his hot route will be, and delivering the ball quickly (and accurately) to Robinson. And if you watch the first part of the clip, you’ll see Robinson quickly picks up on where the pressure is coming from and runs to the vacated spot in the defense. That’s as good as it gets.

Later in the game, it happens again. In another obvious blitz situation, Robinson uses his peripheral vision to identify from where the blitzer is coming and to where he can run his route in order to give Trubisky an easy completion. With the offensive line doing its job in pass protection and Robinson finding space in the defense, Trubisky delivers a pass on the money that allows his receiver to pick up some yards after the catch.

Even though those successful plays highlighted what was otherwise a gloomy effort, they still represented how there are still things that need to be cleaned up. At the top of the list is Trubisky’s footwork, which caught the ire of his head coach earlier in the week. Trubisky delivers two strikes *DESPITE* shoddy footwork that caused him to miss passes throughout Sunday’s game. Just because you get away with it a few times doesn’t mean you shouldn’t be working to kick the habit. Because Trubisky hasn’t shown he can handle a ton of pressure thrown his way, you can expect the Bears will be blitzed a ton moving forward. But at least they put out some tape showing they can hold their own every now and again.

So rather than dwell on what Trubisky needs to fix, let’s focus in on Robinson. Plays like the ones highlighted above are why Robinson is on pace for 109 catches, 1,237 receiving yards, and eight touchdowns after six games. Those are top tier receiver numbers, which is why Trubisky targets Robinson as often as he has to this point. Unfortunately, the results haven’t been there for Trubisky, whose 70.9 passer rating when targeting Robinson is woeful. But at least there are signs of life from what has otherwise been a lifeless offense.