Déjà Vu All Over Again: Chargers 17, Bears 16 Skip to content 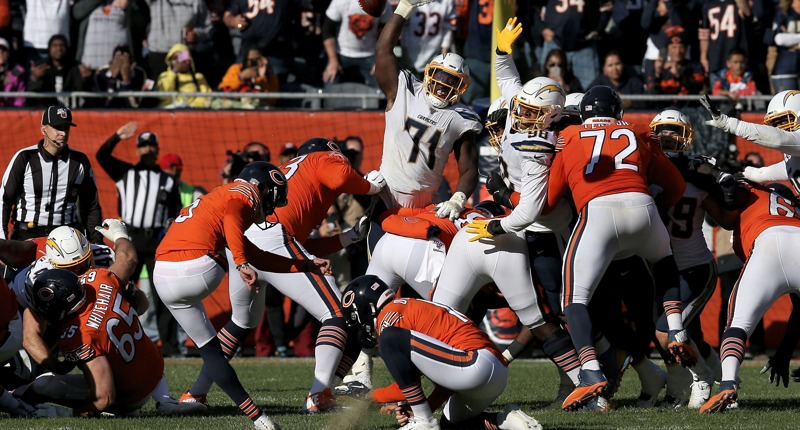 The Bears finally got their running game going.

Heck, Mitch Trubisky even found his legs late in the fourth quarter.

And in the end, the kicker missed one he should have made.

The Bears lost to the Chargers by a 17-16 score. That sentence was written in passive voice, because I refuse to write that the Chargers beat the Bears … because they really didn’t. Los Angeles did so much to give Chicago this game, but escape with a victory because one of these two stumbling teams had to be credited with a win.

Between the slips, drops, penalties, and more penalties, the Chargers had no business being in this game. But Trubisky turned it over twice (and failed to get it done many more times than that), so the Chargers gladly took advantage of one of the two miscues and turned it into what was ultimately a game-winning touchdown.

Eddy Piñeiro is probably going to wear it after missing what would have been a game-winning 41-yard attempt, but the Bears were asking for it. Between sloppy tackling and usage of timeouts, the Chargers were essentially begging the Bears to get closer. But on 1st-and-10 from the Chargers 21-yard-line with 43 seconds left, Trubisky took a knee and the Bears ran the clock until there were three seconds left. In a world where fortune favors the bold, the Bears chickened out. And in a spot where every yard mattered, Piñeiro’s last-second hook is the only thing anyone will remember. Well, that and his early-game doink. Missing early, then late could ultimately seal the Bears’ fate as far as the 2019 season is concerned.

There is so much to chew through and spit out as far as this game goes, and we’ll get to it in due time. But for now, I just want to feel the raw emotion of embarrassment and disappointment that has engulfed my soul. The Bears lost a virtual must-win game and have a ton of questions to answer about their immediate and long-term futures. Unfortunately, solutions won’t be easy to swallow.