Matt Nagy Steadfastly Defends "The Kneel," But What Does That Say About His Offense? Skip to content 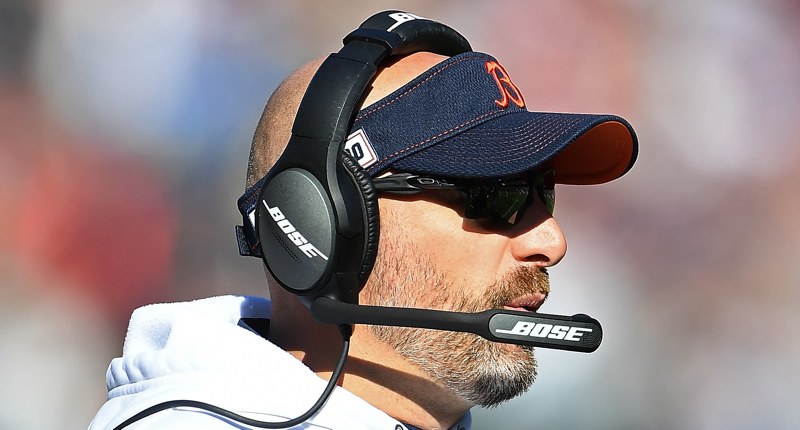 When given an opportunity to put his team in better position to come through with a game-winning score, Bears Head Coach Matt Nagy and the offense turtled.

Reminiscent of the time Marc Trestman chose to kick a field goal on second down in an overtime loss against the Vikings in the Metrodome back in 2013, the Nagy-led Bears kneeled on first down with 43 seconds left to set up a game-winning field goal try after calling a time out when there were just three seconds left.

Here is Nagy’s explanation of why he made that call:

Matt Nagy on kneeling before the FG: “I’m not even going to get into that. I have zero thought of running the ball & taking the chance of fumbling the football. They know you’re running the football, so you lose 3-4 yds. That wasn’t even in our process as coaches to think about."

When given the opportunity to reflect and speak on the decision today, Nagy again bristled:

Matt Nagy on the decision to take a knee before the field goal instead of running a play: "I would do it again a thousand times."

Matt Nagy says his late-game decisions were not about being afraid. "It's about being smart," he says. "I'm very, very comfortable with what I did. If I'm in the same spot again, I'm gonna do the same thing. You got me?"

Beyond the surface stuff of gaining more yards to make for an easier field goal attempt (or even score a game-winning touchdown), Nagy’s decision to kneel on it spoke volumes about how he felt regarding his starting quarterback, a running back his team moved up in the draft to take, and his own offense.

In a world where actions speak louder than words, Nagy’s actions expressed how much trust he had in his quarterback to make the right decision, how he had minimal faith in his running back to not turn it over, and a lack of belief in his offense to gain a few measly yards that would have set up a more makable field goal (or at least not lose the two they lost on the kneel).

Nagy’s post-game statement was an indictment of an offense that was otherwise chugging down the field to the point where the Chargers were calling timeouts in an attempt to preserve time for one last gasp for Philip Rivers and the offense.

Further, Nagy’s decision opened up a new line of questioning – and to be honest, I’m not sure where the answers will come from. How does Nagy look Trubisky in the eyes and say he has full confidence in his QB1 when he wouldn’t give him a chance to get a little bit closer? Will Nagy ever have full trust in Montgomery when he is afraid of a player fumbling when he had fumbled just once in 100+ touches in 2019 and just one fumble during his final year at Iowa State? Can he trust an offensive line that begged him to run the ball more, and seemed to show up out of halftime (only to be scuttled by the play-calling thereafter)?

To be clear, Eddy Piñeiro should have made the kick. Obviously. But that would not have changed the reality of Nagy’s actions. After all, process > results … right? So while a 41-yarder should have been well within Piñeiro’s range, Bears fans know there is no such thing as a “gimme” when it comes to the kicking game. And after Piñeiro missed earlier in the cursed north end zone, Nagy probably should have been more cognizant of what he was getting into at that moment.