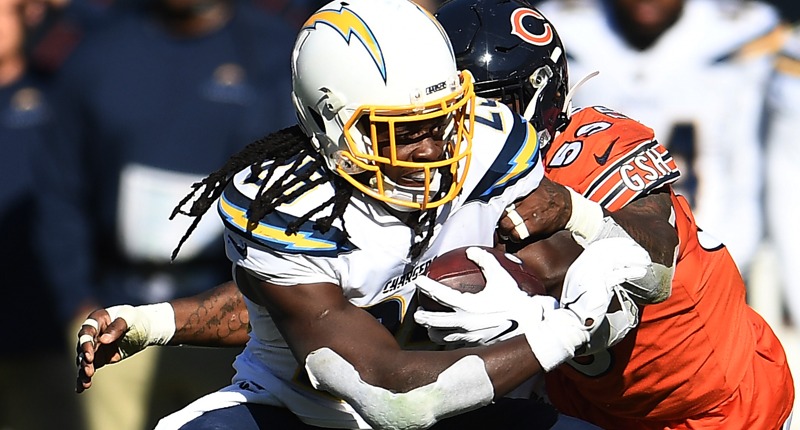 The NFL’s trade deadline is tomorrow. And while we have already seen some movement, we are on the brink of even more before 3 p.m. CT on Tuesday.

Let’s get to some rumors!

From @gmfb: The trade deadline is two days away, and we offer some names to watch — #Dolphins RB Kenyan Drake, #Jets WR Robby Anderson, and #Broncos CB Chris Harris. pic.twitter.com/ZZFQRwm75O

49ers have gotten inquiries on backup QB C.J. Beathard, a name that bears some watching at the trade deadline.

Despite Falcons TE Austin Hooper being in the last year of his contract and team being pressed against cap, Atlanta will not trade its young TE by Tuesday’s deadline.

Source tells me the #49ers have been hearing offers in the sixth-round range for No. 3 QB C.J. Beathard. S.F. is not inclined to do that deal with the trade deadline coming up on Tuesday.

The #Redskins have told other teams they have a second-round pick on the table for LT Trent Williams. So it appears they’re holding out for a first-rounder. https://t.co/4zvN7CodUj

In addition to LT Trent Williams, the #Redskins are calling around trying to trade CB Josh Norman, per sources. Tough to get value right now: Norman is due almost $6 million for the rest of this season and hasn't been practicing because of thigh and hand injuries.

Trent Williams is 31, has a season and a half left on his contract and has missed 15 of 64 possible games the past 4 years.

He’s also the best OT in the NFL when healthy. Gonna be fascinating to see if Washington can get a 1st for him

Heard from a DC source about possible trades beyond Trent Williams, who has been trying to get out since the spring. I get the sense they'd listen on Ryan Kerrigan and others (Josh Norman would be salary dump/little in return) beyond just Williams

Another trade note: continue to hear #Eagles Halapoulivaati Vaitai as the most available OT on the market. #Giants are reticent to tinker with the line while developing Daniel Jones, making Nate Solder a tougher get. Vaitai had several teams interested in him in preseason, too.

Roster Move: #Eagles have acquired DE Genard Avery from Cleveland in exchange for an undisclosed draft pick in 2021.#FlyEaglesFly pic.twitter.com/UsKZIUoudF

The @Eagles loved Genard Avery in 2018 draft as a developmentant edge rusher who had explosiveness and toughness playing for Memphis. Avery ranked high among rookies with QB pressures. The @Browns have depth and were able to get 4th rd pick in 2021, per sources.

Bruce Arians said his young secondary “needs to get their heads out of their asses.” Two cornerbacks league sources tell me teams are trying to trade: Aqib Talib and Josh Norman. Not advocating, but passing along. Tough to make moves after investing so heavily at CB in the draft.