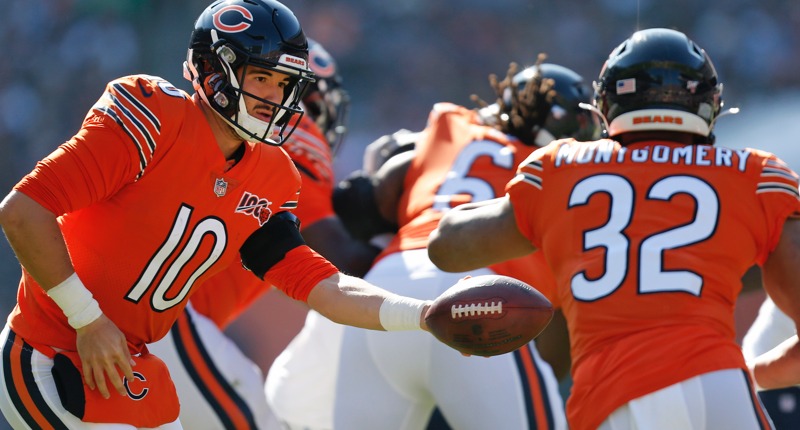 The Bears wore their Halloween orange jersey tops last week, but it was Matt Nagy who was truly in the holiday spirit.

Nagy dressed as a troll, one who opened last Sunday’s game in the I-Formation, as if to say “Here you go, Chicago. You wanted me to turn the clock back and run the ball, well here it is and I hope you’re happy!”

But a funny thing happened along the way … it worked. And I don’t think Nagy expected it to work, so he kept pounding away. In the end, it was the most successful day on the ground the Bears have had in quite some time. David Montgomery put together his first 100-yard rushing game and showed flashes as to why the Bears moved up in the draft to get him.

So while the Bears didn’t win on Sunday, Nagy and the offense can take some solace in that they found an identity. Even if it’s one that doesn’t necessarily fit the M.O. of an ex-quarterback.

What wasn’t there to love from the running game on Sunday?

Have you been in search of a strong effort at the point of attack? Well, it was right there for you with quality blocking from the Bears’ offensive lineman. Were you wondering why the Bears haven’t employed a fullback? Technically, there still isn’t one on the roster. But JP Holtz moved some bodies out of the “I” and cleared space for Montgomery throughout Sunday’s ground assault. Curious if the Bears could add a new wrinkle to the mix? I feel like playing Cornelius Lucas as an eligible player, just to get him in as an extra blocker helped matters.

Who would have thought that the combination of competent blocking up front, Montgomery’s field vision, and ability to shake off tacklers would have served as a strong foundation for a running game?

While the running back gets the glory, Olin Kreutz credits the right side of the line as Rashaad Coward and Bobby Massie for tag-teaming Joey Bosa. James Daniels gets in on the action, too. As does Allen Robinson, who doesn’t get enough credit as he should for being one of the league’s best (and most well-rounded) receivers.

Here’s that 55-yard run, but in the form of a graphic:

Brian Baldinger believes that if the Bears want to get back into the crowded NFC playoff picture, it will start with Montgomery. Baldinger was quite critical of the Bears’ offensive attack after the Saints game, and rightfully so. He sounds like a proud papa talking about the re-birth of the ground game in Chicago with his breakdown:

.@ChicagoBears have a talented back. So much evidence. Work him; that’s what he wants. Work him and join the NFC NORTH RACE; where you belong. #BaldysBreakdowns pic.twitter.com/XmplWLwIfp

Give the people what they want!