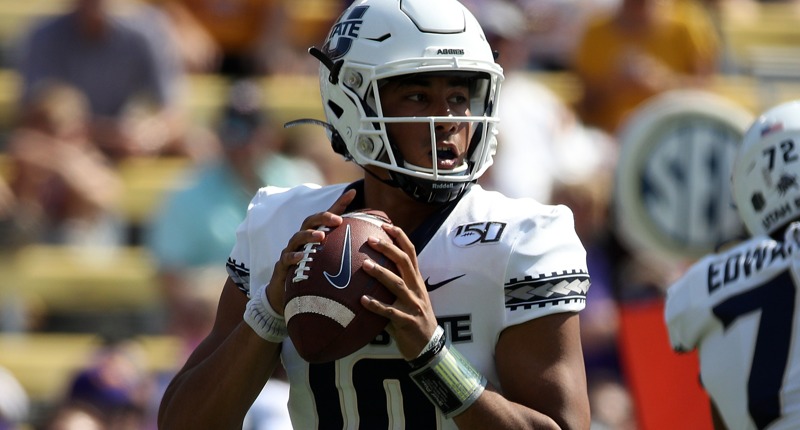 While Chicago does not have a first-round pick in the 2020 NFL Draft, what happens (or, rather, what might happen) in Round 1 still bears watching.

Indeed, Bleacher Report’s Matt Miller has four quarterbacks going in the first round in next April’s draft, and given the Bears current QB situation, I think we’ll want to pay attention:

Ryan Wilson of CBS Sports also has four quarterbacks, including one we’ve previously targeted as a potential second-round target for the Bears:

WalterFootball.com has its own first-round mock where four quarterbacks go in Round 1:

The Bears have a quarterback problem. And the Bears don’t have a first-round pick. So you can say goodbye to dreams of Tua (a virtual lock to be a top-10 pick), Burrow (this year’s college football breakout star), and Herbert (who would have gone first in last year’s draft had he not opted for one more turn at Oregon).

But that doesn’t mean the Bears are out of options, which is why it is important to follow first-round mocks in case a player drops into their lap.

For example, that player could be Jordan Love, the Utah State product, whom DraftWire projects to go to the Bears with one of their two second-round picks. You can check out the full second round here.

Love is described as the riskiest of the projected first-round quarterbacks, but don’t let that scare you. Because where there are risks, there are often rewards.

Love’s critics see a quarterback who has more interceptions than touchdowns thrown this year as a sign that he’s destined to be a turnover machine. That’s obviously not very encouraging, but Love’s backers see him as a player who tries to channel his play-making to do too much with a sub-par supporting cast.

Miller mentions that his supporters can often be found dropping comps to Patrick Mahomes and Deshaun Watson when it comes to style of play, and that’s appetizing as heck. It’s that type of dichotomy when it comes to analyzing Love’s game that makes me wonder if he might available in Round 2, as teams tend to shy away from risky quarterback picks. But because Miller sees him going to the Titans as the anti-Marcus Mariota, it is possible a team sees him as a high-risk, high-reward talent who could thrive in the right system.

Jalen Hurts going to the Patriots would be so on-brand for one of the few franchises in the NFL that knows what it is doing when it comes to quarterback scouting and development. Between Tom Brady, Jimmy Garoppolo, and Jacoby Brissett, New England has drafted three quarterbacks who are leading teams at the top of their divisions. Bringing on Hurts would be just the latest example of the rich getting richer. Ryan Wilson of CBS Sports believes there is a lot to like about Hurts’ game, not to mention the upside that is starting to be unlocked while playing in Lincoln Riley’s system. Wilson pegs Hurts to the Pats as a long shot (aren’t they all? it’s an October mock draft for crying out loud…), but it is one that is rooted in logic. Brady can’t play forever (unless he can).

Jacob Eason pops up as a first-rounder in two mocks, but not in all — which says a lot about where we are in the season and what certain eyes are seeing out of certain quarterbacks. Eason was a five-star recruit by ESPN, Scout, Rivals, and 247Sports coming out of high school. He started his college career at Georgia and was beaten out by Jake Fromm (more on him later), before settling in at Washington. The tools are there for Eason, who is off to a good start with the Huskies. If he continues on this path, more mocks will have him going in the first round. But if he levels off or others leap-frog him between now and the end of the college season, Eason could be primed to be picked in Round 2.

Jake Fromm has been lapped by some of his fellow quarterbacks in this draft class, but he has arm strength and notable intangibles that make him stand out. He was a freshman starter on an SEC championship-winning Georgia team and has been praised for his processing of the game. Throwing some gut-punch interceptions in a home loss to unranked South Carolina stings, but there are still some things to like in Fromm’s game. The Bulldogs will get more big games on their schedule this fall, which will give Fromm ample time to strut his stuff.