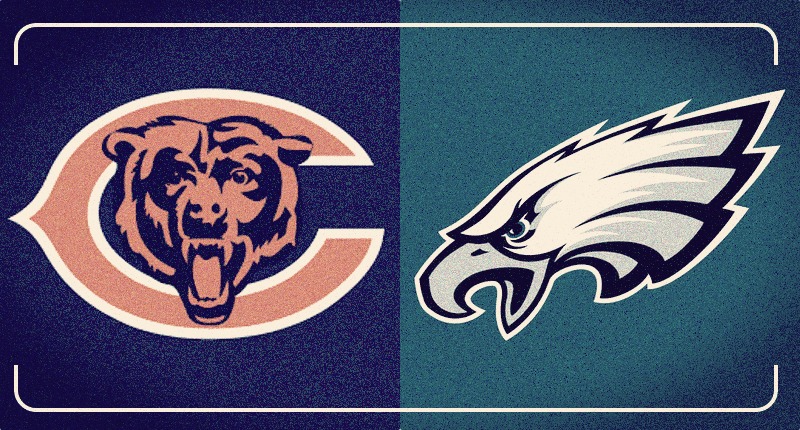 Sunday is … a revenge games for Jordan Howard and Alshon Jeffery, a matchup between Doug Pederson and Matt Nagy (to show Andy Reid who runs his system best), a bragging rights battle between Chicago’s Italian Beef and Philadelphia’s Cheesesteak for superior sandwich.

Whether by hook or by crook, this is a game the Bears have to win. By any means. Just do it.

The Westgate SuperBook in Las Vegas lists the Bears as 4.5-point underdogs against the Eagles with an over/under set at 41.5. Chicago had been favored in each of its last three outings (all losses) and in six of seven games played this season. The “over” has come in for three of the Bears’ last five games, which could be worth noting.

The Bears lead the all-time season series 29-12-1, but are 1-3 in playoff games. Including the one they squared off in back in January.

Bears Offense: Anthony Miller is an outside-of-the-box pick, but hear me out. Miller has seen his snap share jump since Week 1, and has played at least 40 snaps in each of the last four weeks. Recently, Miller has seen his snap percentage tick up to north of 60 percent in three of the last four games. The Bears need to establish a ground attack to open up play action passes down the field, where Miller can operate against an Eagles secondary that Pro Football Focus notes has allowed the second-most fantasy points per game to opposing receivers. Fantasy isn’t always reality, but there is some real value in knowing that Philadelphia’s secondary has been vulnerable for most of the year.

Bears Defense: Kyle Fuller has the unenviable task of shutting down DeSean Jackson, who is lined up to make his return to the Eagles lineup. Jackson one of the league’s all-time great deep threats, having led the league in yards per reception four times in his career (most recently in 2018 with the Buccaneers). In a game headlined by Mitch Trubisky’s six touchdown passes, Jackson hauled in five catches for 112 yards as a member of the Bucs. If Fuller doesn’t control him, the Bears are in for some trouble.

Eagles Offense: Jordan Howard is hitting his stride. After getting just 14 carries in his first two games with Philadelphia, Howard has *AVERAGED* 14.3 rushes and 63.5 yards in six games since. That comes out to a modest and respectable 4.4 yards per carry. But if you extrapolate Howard’s stats from the last six games over a full 16-game season, we would be looking at a ball-carrier who gets 229 rushes, 1,016 yards, and 13 rushing touchdowns. Not bad for a guy who was discarded as not being a fit in Chicago last March.

Eagles Defense: Fletcher Cox is PFF’s sixth-highest-graded interior defensive lineman, and with good reason. Cox is menacing against run and also happens to be the analytic giant’s third-highest-graded pass-rushing interior defensive lineman. In other words, Cox will be a load to handle for Bears interior linemen Rashaad Coward, James Daniels, and Cody Whitehair. If the Bears can’t slow down penetration from the interior of the Eagles’ defense, it will be a long day.