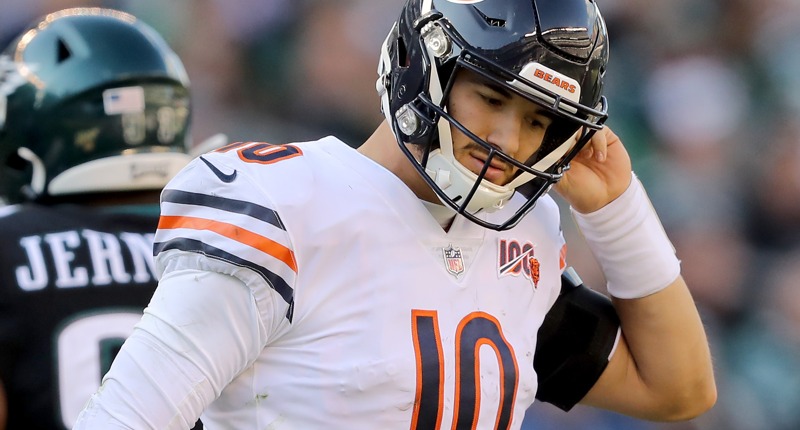 For the third consecutive week, Bears Head Coach Matt Nagy was asked if he has considered benching starting quarterback Mitch Trubisky. And the answer is the same as it ever was: “No, I didn’t,” Nagy said, via PFT’s Josh Alper. “I think for all of us, we knew that we could collectively be better.”

The quarterback will always take a good chunk of the heat, and that comes with the territory. But while Mitch Trubisky’s play has been a (if not the) problem, it isn’t the only issue facing the Bears. That is something everyone (including Nagy) can agree on right now. But as true as that may be, we can’t afford to fall into a trap … we’ve seen this movie before.

An offense that struggles in the first half, but puts it together in the second half … only to see the defense falter late in the game. This film played at Soldier Field last January when the offense’s late-game rallies weren’t enough to secure a victory against the Eagles. A tale of “too little, too late” played out again, this time with Philadelphia’s Lincoln Financial Field as the backdrop. But unlike in January when the place-kicker was turned into a scape goat, there will be no one fall guy this time around.

The next steps are obvious because they are all too familiar. We’ll find ourselves searching for answers in the form of a free agent, trade target, or draft pick. They will be presented as a savior of sorts as the Bears move away from another failed quarterback project. But do not — and I cannot stress this enough — fall for it again. One person wasn’t going to save the 2019 Bears, and they aren’t saving the 2020 team either. Not with a limited offensive scheme featuring a coach who seemingly doesn’t trust his quarterback, a quarterback who doesn’t appear to trust his offensive line to block for long enough to allow plays to develop, and a defense that might not trust anyone operating on the other side of the ball.

Maybe this is a blessing in disguise. Perhaps it is good that there is no one singular thing that will serve as a masking agent for why the Bears are what we thought they wouldn’t be. And yet, because there is no quick fix, simple trick, no small thing that will make it all better is probably what hurts the most. That these Bears are a systemic failure after eight games is bad, but also good if you’re the type who believes sunshine is a quality disinfectant.

But now that we see the problem, how does it go about getting fixed? I suppose we have eight weeks to start finding answers.