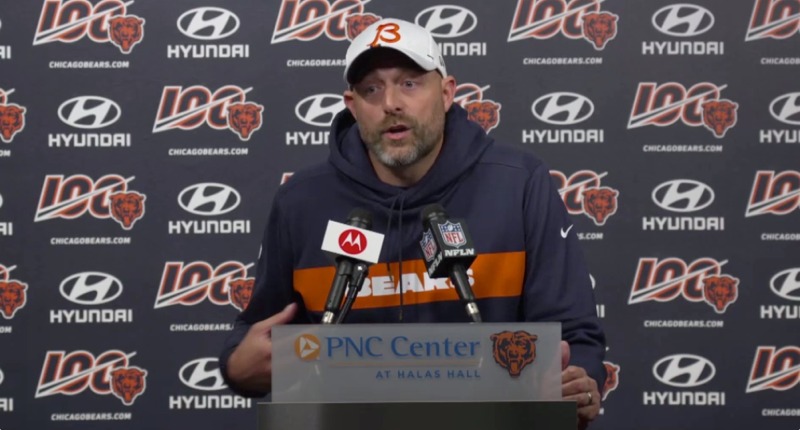 During his Thursday press conference at Halas Hall, Bears Head Coach Matt Nagy was asked if Cody Whitehair would be moved back to the center position.

And his response was surprisingly non-committal:

Matt Nagy declined to say whether the Bears will move Cody Whitehair back to center and James Daniels to left guard. He did admit: "We're going to look at a lot of different things. We're always looking for solutions. I'm going to leave it at that."

This is something of a surprise from Nagy, who said he wasn’t going to discuss game strategy as part of his Thursday presser. Indeed, Nagy’s framing of the answer could be viewed as something being seriously considered. And why not? Whitehair has played his best ball at center since moving to the position as a rookie in 2016, with his best season coming in 2018 when he was named to the Pro Bowl. As the Bears work through solutions to what has been a problematic offensive line, the discussion of shifting Whitehair from left guard to center should come up.

Should the Bears’ “solution” to their problems include moving Whitehair back to center, it would come with pushing James Daniels back to guard — and that might not be a bad thing either. Daniels ranks 21st among the 32 qualifying centers on Pro Football Focus’ grading scale. His pass-blocking grade ranks in the middle of the pack (16th), but his run-blocking grade is the ninth worst among qualifiers at the position and it is dragging his grade down. Perhaps a move back to the position he played as a rookie could spark stronger play from the 2018 second-round pick out of Iowa.

Last year’s offensive line was a strength. Whitehair was a Pro Bowl center at the top of his game/in the prime of his career. And Daniels was an up-and-coming interior line prospect who settled in at left guard and drew praise as a first-year success story. So while it’s understandable why the Bears made the move to get two talented interior linemen back to their original positions, something isn’t working here and change may well be needed. And even though Nagy wouldn’t tip his hand as to when it’s coming, solutions are clearly on his radar.