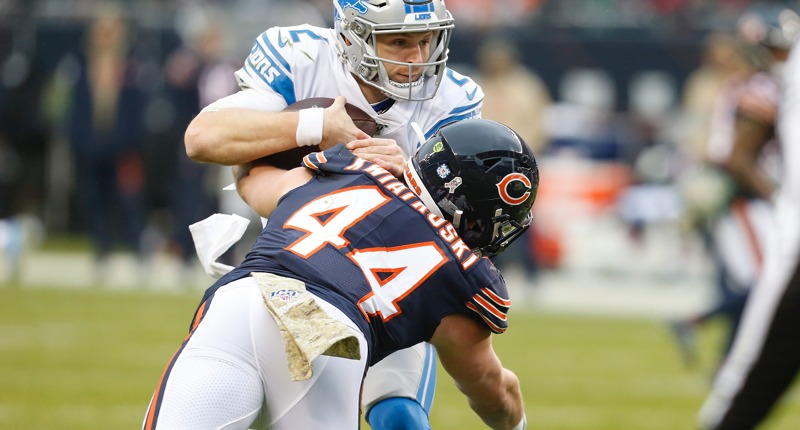 I spent a chunk of the first quarter listening to the Bears-Lions game on the radio, so I didn’t get a look at Danny Trevathan’s injury until I reached my destination.

And what I saw didn’t look good at all:

In a screen shot, it looks even worse:

Trevathan was originally listed as questionable to return, but – obviously – he never got back in the game. He is scheduled to get an MRI, per NFL Network reporter Stacey Dales, and Bears Head Coach Matt Nagy gave us a little more earlier today:

Coach Nagy acknowledges IR could be in the discussion for Danny Trevathan following "not real pretty" elbow injury.

In the meantime, we should be thankful for Nick Kwiatkoski.

In baseball terms, Kwiatkoski is the go-to pinch-hitter when the Bears’ linebacking corps is in a bind. Not only has he eaten up snaps for both starting inside linebackers at some point this season, but he’s also excelled in those contests, collecting nine tackles, a tackle-for-loss, one quarterback sack, and an interception (which the Bears offense turned into a touchdown!) in Chicago’s 20-13 win against the Lions.

Much like his performance against the Vikings in Week 4 when he stepped in for Roquan Smith, Kwiatkoski played sound fundamental football and did all the right things on a day he racked up 10 tackles, a sack, a forced fumble, and a pair of tackles-for-loss. So to say that Kwiatkoski filled in admirably for an injured Trevathan on Sunday would be an understatement.

You always remember your first interception …

Turned this one into points.

… but where Kwiatkoski has been at his best this year has been when defending the run.

Even though he hasn’t played enough snaps to qualify for Pro Football Focus’ leaderboard, it is worth noting Kwiatkoski’s 80.2 run defense grade is 11th best among linebackers who have played at least 100 total snaps. That is pretty darn good and much appreciated since there isn’t a drop-off from Trevathan’s run defense, which grades out as the 21st best among qualifier’s on PFF’s grade scale.

A two-game sample isn’t much to draw from, but we are now going on four years of seeing Kwiatkoski thrive in this reserve role. So much so, we might need to open up the conversation regarding his long-term future with the team. He is a free agent at season’s end, as is Trevathan. We know Trevathan is a starter in this league, but Kwiatkoski is putting out enough good tape to prove to someone that he can also start if given the opportunity. Whether that chance comes with the Bears remains to be seen. But it’s worth keeping an eye on for the rest of the season, especially if he can keep up his level of play.