Must Read of the Year: How the Bears Landed Trubisky ... Instead of Watson or Mahomes Skip to content 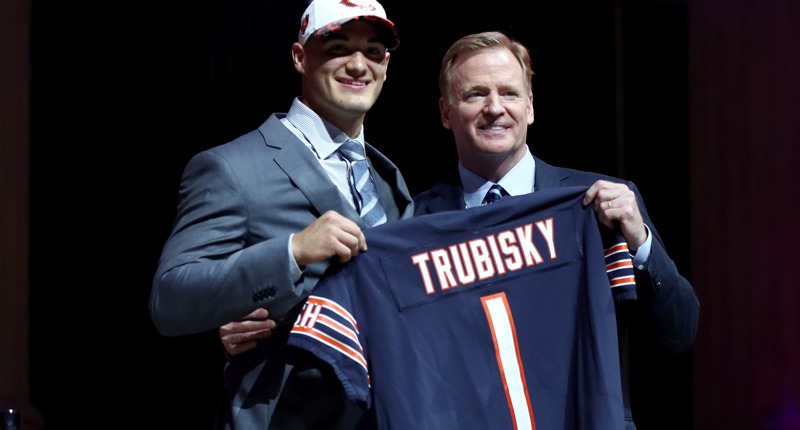 For as long as my mind functions, I’ll never forget NFL Draft Night 2017.

The memories of writing this the morning after the Chicago Bears selected Mitch Trubisky with the second pick are still fresh:

“At some point, I expected “Why?” to be a trending topic, because of the shocking nature of the Bears’ draft day deal to acquire Trubisky.”

Unfortunatly, the cries of “WHY!?” have only grown since draft day. Because even though Trubisky led the Bears to the postseason in his second year as a starter and earned a trip to the Pro Bowl after making a significant step up from Year 1 to Year 2, the regression in Year 3 has been painful to watch. Meanwhile, draft classmates Deshaun Watson and Patrick Mahomes have had – sigh – meteoric rises to stardom.

Watching quarterbacks thrive in Houston and Kansas City while Chicago’s signal caller struggles has been a nightmare for Bears fans … like me. Ugh.

But if you’re looking for a little more explanation of exactly what happened a couple years ago, we’ve got you covered, with your must-read of the day:

Why did Bears GM Ryan Pace absolutely have to have Mitch Trubisky over Patrick Mahomes and Deshaun Watson?@danwiederer and @Rich_Campbell put together the QB puzzle of the 2017 NFL draft.https://t.co/jPTHS7pIDN pic.twitter.com/PWjfFUaJKZ

Dan Wiederer and Rich Campbell of the Chicago Tribune pieced together a 10-part deep dive into how Bears GM Ryan Pace came to the conclusion to trade up and draft North Carolina quarterback Mitch Trubisky with the second overall pick in the 2017 NFL Draft, passing Clemson’s Deshaun Watson and Texas Tech’s Patrick Mahomes in the process.

Their reporting is layered and detailed. It features twists, turns, and new anecdotes that had not been revealed in previous reporting. In short, this is the must-read of must-read pieces when it comes to the Bears’ quarterbacking situation.

There is so much good stuff here, but what sticks out to me was how close the Bears were to going with someone other than Trubisky.

This piece notes that then-Head Coach John Fox ranked Watson as his No. 1 quarterback. Fox was part of the large contingent of Bears higher-ups who traveled down to Clemson for Watson’s Pro Day, and it is worth pointing out that he was essentially arm-in-arm with Dabo Swinney (Watson’s head coach) throughout the workout. It is also written that Quarterbacks Coach Dave Ragone (the lone offensive coach who was held over from Fox’s regime) was also on board with Watson as the class’ top-rated quarterback. And to further twist the knife, ex-Bears quarterback Jordan Palmer — who was working with Watson at the time – was virtually begging Chicago to take the Clemson quarterback because what he had proven on the field instead of trying to build that from scratch with Trubisky.

And then there’s Mahomes. Long before he took the football world by storm and earned NFL MVP honors in his second season, Mahomes was a prospect whose private workout with the Bears wowed the team. He even went as far as to dig into his bag of tricks to whip out the no-look throws that have become instant highlight-reel moments. The Bears liked Mahomes’ arm and swagger so much, he ended up as their second-highest-rated quarterback on their board and among their top tier of prospects on their draft board which also featured Trubisky, defensive end Solomon Thomas, safety Jamal Adams, as well as running backs Leonard Fournette, and Christian McCaffrey.

In the end, it shouldn’t be lost on anyone that the head coach (at the time) and quarterbacks coach wanted to go in the direction of drafting a proven leader at the collegiate level, while the general manager wanted to roll the dice on athleticism and upside. And even then, he chose the most raw and least experienced quarterback. The big-picture view of the situation is eye-opening on so many levels, so I encourage you to give it a read when you get the chance.