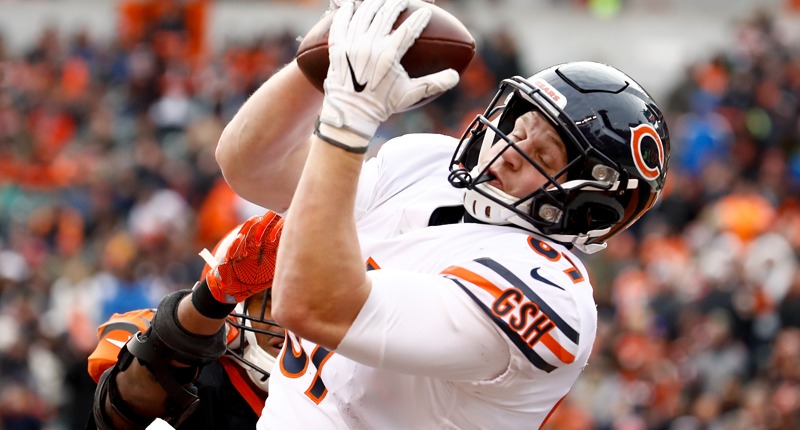 In the wake of the news that Trey Burton was a non-participant in Wednesday’s practice, I wondered if Adam Shaheen would get one last crack at making a dent in this offense. And while it’s plausible that he’s called upon as the next man up, I’m not sure I’d bet on it.

Here are Head Coach Matt Nagy’s words from Monday’s press conference, where he was asked about Shaheen’s place among the inactives and how he could get back on the active game-day roster:

Nagy's full quote on former #Bears second-round TE Adam Shaheen, a healthy scratch Sunday, getting back in lineup: “We want all of our players to be able to be completely detailed and play hard and do everything they can to be the best player they can be.”
Well then.

Folks … I think we are witnessing “the beginning of the end” of the Adam Shaheen era in Chicago.

Shaheen being made inactive for the Bears’ Week 10 win against the Lions feels like a telling sign. He has just nine catches for 74 yards this season, which is not where the tight end should be in his second year in this offense and third in the NFL. Further, Shaheen has made some high-profile mistakes in unbearably close losses.

Running a slant at the goal line when a fade was called for in the loss against the Chargers and being unable to pick up a kick-off that would have set the Bears up for one last gasp at a comeback against the Eagles might have been what broke Nagy and led him to make his decision to bench Shaheen. But that Nagy didn’t even seem open to more Shaheen (even knowing that Burton left Sunday’s game early with an injury) is also pretty damning.

So even if Burton can’t go, Shaheen isn’t guaranteed to step back into the lineup. Not at least until he can be the detailed, high-effort guy his head coach wants him to be. That leaves Ben Braunecker, J.P. Holtz, and Bradley Sowell as being in place to take the snap load left behind. After that, the Bears’ front office will need to do some soul searching when trying to figure out how the tight ends room looks next year because this most certainly ain’t it.