As Insane And Egregious As It Gets: Myles Garrett Hit Mason Rudolph In The Head With His Helmet Skip to content 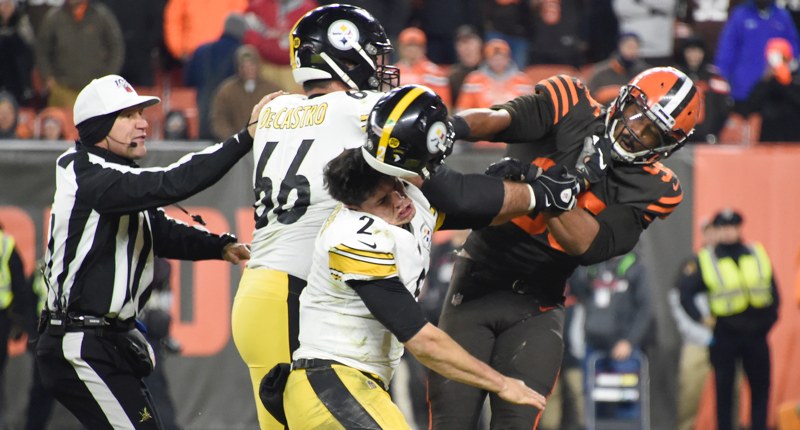 I once had a friend of mine who played college football try to explain to me why late and egregious hits happened. The game of football is aggressive and physical, and you’re already out there trying to “HIT GUYS,” and sometimes that spills over after the whistle in ways you otherwise totally would not do, and would otherwise totally be able to control yourself.

I don’t think that’s too hard to understand, even if we – as folks watching – are still justified in being pissed off when those bits of nastiness happen (eff you, Harrison Smith).

So, that’s all to say, I do get that there’s build up that preceded what happened in the Browns-Steelers game last night. I also get that the Steelers aren’t totally blameless, and quarterback Mason Rudolph did help escalate things.

But what Myles Garrett did in the final seconds of the game last night go so far beyond inexcusable that he’s going to be in for an extremely long suspension.

If you didn’t see the full play, here it is:

There was build up all game, but this is so unbelievably over the top that it's hard to believe. This is the full Myles Garrett helmet swing if you haven't seen it yet: pic.twitter.com/nh6rxLsTAe

To say that Rudolph could have been seriously injured really doesn’t do it justice, given how helmets are designed. Cracking Rudolph’s skull, ending his career, and maybe much worse – those were all serious risks posed by what Garrett did in that heated moment.

Garrett’s explanation after the game sounded familiar, but like I said. This was way too much for anyone to excuse or even fully understand.

“I made a mistake. I lost my cool, and it’s going to come back to hurt our team,” Garrett told Browns.com. “The guys who jumped in to the scrum, I appreciate my team having my back, but it should have never got to that point. It’s on me. What I did was foolish, and I shouldn’t have allowed myself to slip like that. It’s out of character, but in a situation like that where it’s an emotional game, like Larry said, I allowed myself to fall into my emotions with the last play and what happened.”

Discipline will be forthcoming, and it will be severe. This is not a moment or image that will fade from folks’ memories any time soon.