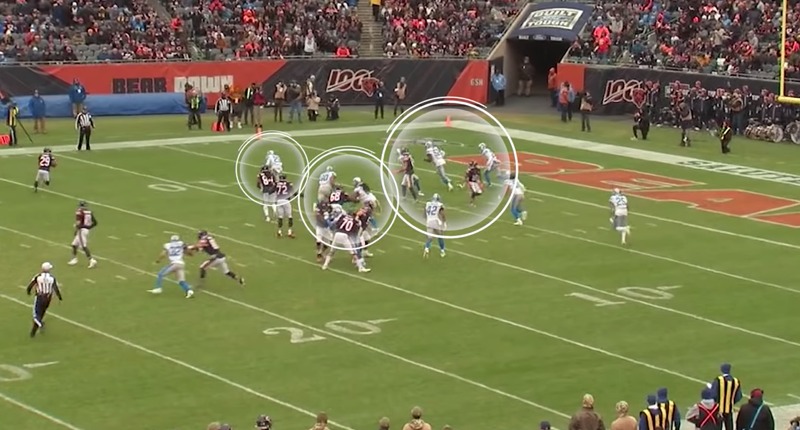 If you feel as if you had an “A-HA!” moment last week during the Bears game, but aren’t quite sure why, just know you are not alone. It is likely that you caught something that felt familiar, but were unsure of what it was because it had been such a long time since you had seen it on a football field.

What you saw — or at least, what *I* saw — was Head Coach Matt Nagy digging into his old bag of tricks to help the offense shake the doldrums and rally toward a come-from-behind win against the Lions in Week 10.

When the Bears’ offense was showing life in 2018, it was often because of the use of misdirection, motion, deception, and variation of formations to create space, leverage for playmakers, and open windows for which Mitch Trubisky can throw. Because while Trubisky had his issues last year, at least he showed an ability to make easy throws that allowed his guys to make plays in space. That hasn’t been available as often this year, which is one of the reasons the Bears offense hasn’t taken a step forward as many (myself included) expected.

Doing this against the Lions is one thing. HOWEVER, doing it against the Rams on the road would truly be impressive. But because the Bears were able to do it once, perhaps it will give the offense the confidence boost it needs in order to get it done on a bigger stage under the bright lights of Sunday Night Football.