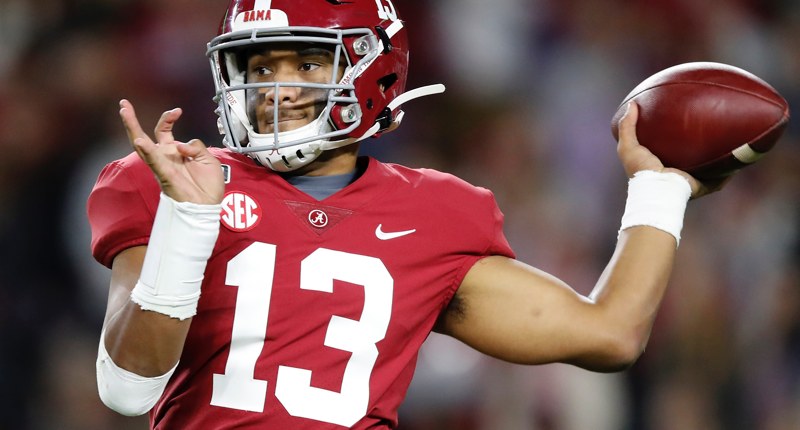 And this is what team orthopedic surgeon Dr. Lyle Cain had to say about it afterward:

Statement from Alabama on Tua pic.twitter.com/MFoxlML7XZ

Tagovailoa suffering right hip dislocation sounds as painful as it looked in the video, but that the expectation is that he will make a full recovery is welcome news. However, the injury figures to play a key role in what his draft stock will look like in April.

Prior to Saturday, Tagovailoa was a virtual lock to be a top-10 pick in the 2020 NFL Draft. Some looks at early draft boards and mock drafts had him as the top-rated quarterback prospect in his class. Those that didn’t still had him going safely within the top-10. That is probably going to change with Tagovailoa suffering his third serious injury in as many seasons. Remember, Tagovailoa also has some ankle issues that have popped up since becoming a starter at Alabama. Injury red flags could deter certain teams from putting Tagovailoa high on their boards, while others might deem them as enough to keep him off altogether. And to think, that’s just where the trickle-down effect begins.

Now that Tagovailoa’s injury issues have entered the equation, healthy quarterbacks with prospect pedigree could enter the mix and be pushed up draft boards. The likes of Justin Herbert (Oregon), Jake Fromm (Georgia), Jalen Hurts (Oklahoma), Jordan Love (Utah State), and Jacob Eason (Washington) could be viewed in higher standing and move up positional rankings. This could trigger some sort of run on quarterbacks in the draft, especially if teams are willing to dive into free agency to find solutions.

So where does this leave the Bears? Honestly, it is a complicated spot.

Teams like Miami, Washington, Cincinnati, Tampa Bay, and Tennessee are among those who have definite needs at quarterback who probably would have had their eyes on a healthy Tagovailoa. But even if they pass on him, it doesn’t account for teams such as New England, New Orleans, or the Los Angeles Chargers, who could also be in search of a quarterback and could take a gamble on Tagovailoa’s upside late in the first round.

In short, Tagovailoa’s injury could ultimately lead to teams that otherwise would have drafted him to jump into the free agent or trade market for a quarterback. Or it could push them to take a quarterback who otherwise would have been taken later in the draft. In either case, it could very well leave the Bears in a place to use their second-round picks as part of a move to slide up and draft Tagovailoa in a place where he wouldn’t have been had he not been injured. But it is simply too early to tell right now.

In the end, there are still plenty of ways for this offseason to unfold at the quarterback spot for various NFL teams. Between Tagovailoa’s possible fall down the draft boards, free agency and trades on the horizon, and other prospects rising on the board, things are getting that much more interesting regarding the major quarterback shakeup that seems to be on the horizon.