So Did Mitch Trubisky Just Get Benched? Or Hurt? Or Both? Skip to content 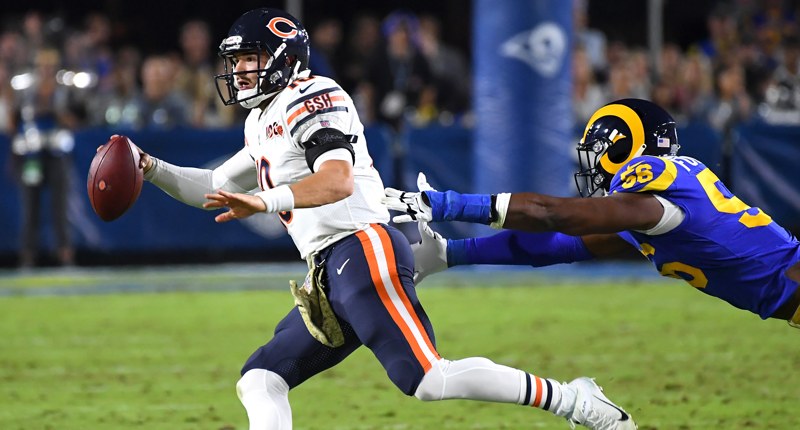 With an offense increasingly stymied, and a defense increasingly capable of resuming its standing as one of the top five in the league, it would have been understandable – purely from a competitiveness standpoint – if the Bears had made a quarterback switch weeks ago.

Third-year quarterback Mitch Trubisky seems to have taken significant steps back this year, to say nothing of any hoped-for improvement, and we’re already obsessing about what quarterback options will present themselves to the Bears for next year. It just feels like everyone paying attention already knows what’s up.

But, the actual benching of Trubisky has never come, I presume, because (1) Trubisky’s possible upside in individual games makes the value difference in going to Chase Daniel (a career back-up for a reason) pretty close to even, and (2) once you bench Trubisky, you concede that it’s definitely over for him, and remove that 1% chance he figures it out in the final games of the season. With weeks going by, however, that 1% chance gets even smaller, as do the number of games.

That is all to say, if Head Coach Matt Nagy had decided to bench Trubisky last night in favor of Daniel, in an attempt to come back and win the game, it’s not like that would have been utterly insane.

But going to a cold Daniel with just over three minutes left in the game would’ve at least been characterized as odd timing, even if the decision might’ve been eminently defensible.

And that’s why it is now just as plausible that the official story – Mitch hurt his hip, got treatment at halftime, and then it got worse in the second half to the point where he couldn’t effectively play through it anymore – is actually true. I mean, I buy that it did happen. A hip injury was the “reason” Trubisky was pulled. Got it. Buy it.

HOWEVER, the entire context that surrounds the injury, and the willingness for the team to not have him keep playing through it probably gives this situation at least a flavor of benching. So can’t it be both an injury and also, yeah, kinda-sorta a benching?

You’ll note that the broadcast didn’t mention the injury when Daniel replaced Trubisky, and they did not receive word of any injury until much later. You’ll also note that Nagy called for a Trubisky option on a 3rd-and-short in the third quarter, which was already an extremely curious call – irresponsible, even – if Nagy knew that Trubisky was managing the kind of hip injury that might take him out of the game.

According to Nagy after the game, it seems like he didn’t know about the hip until just a few series before Trubisky was pulled.

“We knew it a few series earlier that something wasn’t right,” Nagy said, per ESPN. “We watched him kind of just to keep an eye on him and see how it was, and I had to pull him aside and talk to him and just ask him and say exactly that we needed him to be honest with us. Trying to play through that is what he was doing, and at the same time, it was affecting a little of how he was able to throw. … I don’t want to put him at more risk, and I also don’t want to affect how the play is for the team.”

There was a conversation late on the sidelines that looked like a “I’m pulling you” situation, and everyone assumed that’s what was happening. But apparently it was the conversation about the state of Trubisky’s health, asking the QB to be honest about whether he could continue to play. Trubisky was honest with Nagy at that time.

“I’m not doing the team any favors if I’m not able to run around or throw the ball with accuracy because I’m throwing with all arm,” Trubisky said after the game, per NBC. “You just gotta be smart with that factor but I’m going to fight as long as I can and try to be out there with my guys.”

Alright, then. We’ll find out more this week, as Trubisky’s injury is evaluated and his status for this weekend comes into view. I suspect if he’s healthy, he’s gonna be right back out there, and we’ll all be left to speculate whether this was just a kinda-sorta benching in the hopes that Daniel could pull out a last-minute victory with Trubisky at something slightly less than 100%.

Not that any of this really matters for the long-term picture, because, injury or not, last night was a reminder that Trubisky just isn’t going to be the guy after this season.