Woulda, Coulda, Shoulda, and Other Bears Bullets Skip to content 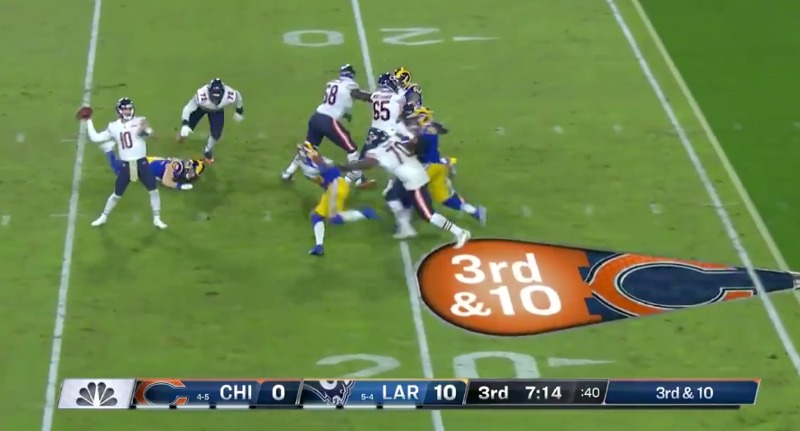 California dreamin’? More like California nightmares … am I right?

Yours truly has a day of travel ahead of him, starting with an afternoon flight to Las Vegas, a 7-hour layover, and a red-eye flight back to Chicago. Saving a few bucks while spending some time in Vegas isn’t the worst thing in the world.

Mitchell Trubisky struggled tonight despite being pressured on just 5 of 44 dropbacks (11%). Trubisky had little success throwing to his left compared to right.

Trubisky has one positive EPA/play game all season, and it was vs. Washington.

He looked good in spots tonight, yet still was below *his* average for *this season*.

(The dashed line represents the average QB game (across all teams) since 2018.) pic.twitter.com/i1B19lUqs7

The Rams recorded a pass block win rate of 79% tonight, their best of the season (average entering today: 54%).

The Bears recorded a pass block win rate of 38% tonight, their worst of the season (average entering today: 62%)

Against the Rams, Khalil Mack rushed the passer on 10 snaps and dropped into coverage for 7 snaps.

Khalil Mack is getting all sorts of attention from the Rams offensive line.#nextgenstats

Even though he has “only” 5.5 sacks, Khalil Mack is third in the NFL averaging 3.4 pressures per game (via @Sportradar). https://t.co/K3tWWvFtjR

A pop warner football team in Compton is on its way to making history but they need the community's help to get them there.https://t.co/Wyzff0gb51

The St. Louis Cardinals Just Blew a 2-0 Lead by Giving Up SIX RUNS in the 9th Inning