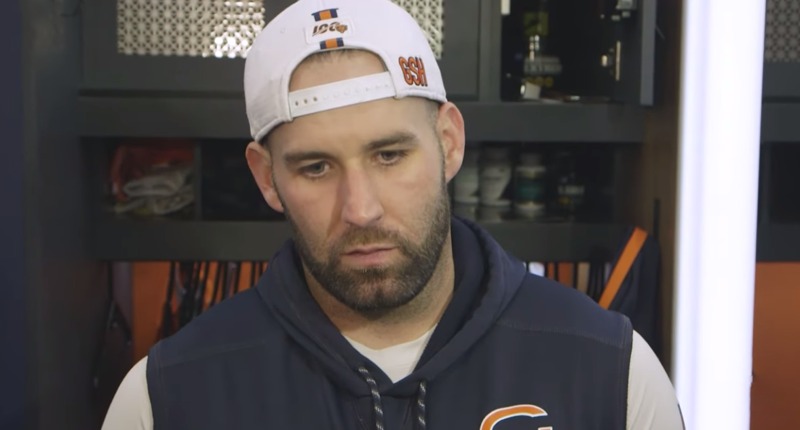 Whenever I think about Mitch Trubisky’s struggles, I often fall back to when I first saw him at training camp in 2017 – it wasn’t anything he did in practice, but more so that he hung around after the final practice whistle had blown to get in some extra work with a reserve center and back-end-of-the-depth-chart receivers to work out some things.

This was Trubisky’s way to put in some of the extra work he wasn’t getting, because Mike Glennon and Mark Sanchez were taking a bulk of the snaps. My thought at the time was simple: “If this thing goes off the rails, it won’t be because he isn’t putting in the effort.”

Few things frustrate Chicago sports fans (or maybe all sports fans) more than the perception of a player who doesn’t care as much as he should. Fortunately, that doesn’t appear to be the case with Trubisky. However, I’m starting to worry about whether he’s putting too much pressure on himself, and if that’s not a factor in things compounding on top of him.

Save for Dave Ragone (the Bears QBs Coach who has been with Trubisky since his rookie season), I’m not sure anyone knows Trubisky as well as Chase Daniel. With that in mind, I found some of Daniel’s comments regarding Trubisky’s development this year interesting. You can watch a full video’s worth of Daniel saying things below, but these snippets are ear-catching.

First, Daniel provided a glimpse at what it was like dealing with Trubisky after his injury-shortened game last Sunday: “When any quarterback can’t finish a game because of injury or whatnot, especially when a guy like Mitch he cares so much and he felt like he let his team down,” Daniel said. “Obviously losing, not playing as well as he wants to all that sort of compounded, so that’s pretty normal. But if you’re hurt, you’re hurt.”

But that wasn’t the only time Daniel made a reference to Trubisky feeling as if he let his teammates down: “If you do good, you’re going to get too much praise. If you do bad, you’re going to get too much blame. That’s just how it is. That’s the quarterback and the head coach of an NFL team — especially in Chicago,” Daniel explained. “And (Trubisky) realizes that. He understands it. He just cares so much and he wants to make plays so bad, he feels like he let the team down when he doesn’t play up to his standard.”

Now, I find myself thinking back to Trubisky’s summertime interview in which he opened up about his borderline obsessive-compulsive habits. That he was so fixated on improving, that he felt the need to make sure he had places to throw while he was on vacation.

Obsession is a thing for Trubisky that came up when Matt Nagy arrived in Chicago,  last July during offseason training, and even before the playoff game against the Eagles. Honing your craft is one thing. But it’s something else to be so “in” on it as to not let the game breathe. Think of it like when a struggling batter grips the bat too tightly because he knows he is in a slump (or a golfer swings harder for extra distance). That is essentially where Trubisky is, and his obsession to get out of his funk is only compounding things.

Ideally, this is where Daniel steps in and does what a good backup can to alleviate the pressure on the guy ahead of him on the depth chart. If it doesn’t work, then the Bears will be going back to the drawing board and fixing up their quarterbacks room sooner, rather than later.