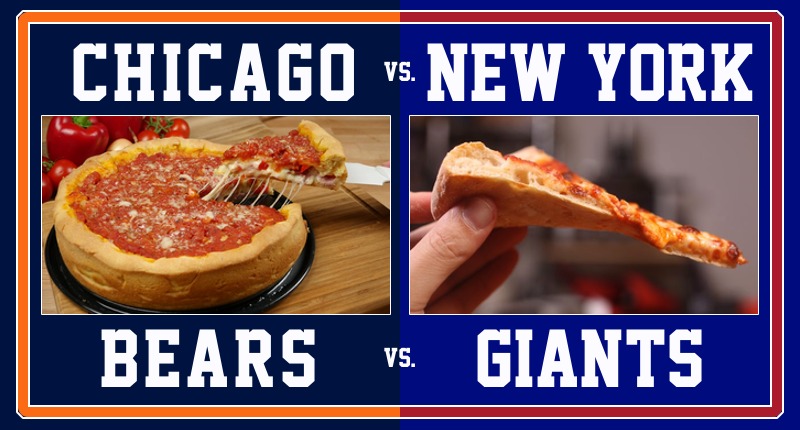 With the Bears and Giants on the outside looking in at the playoff picture, two proud franchises representing a pair of America’s greatest cities have to find something to battle over in Week 12’s showdown at Soldier Field.

And because we already know Chicago-style hot dogs (which aren’t sandwiches, mind you) are superior to the New York dog (because who puts sauerkraut on a dog? Keep it!), the winner of Sunday’s matchup determines who gets bragging rights for the rest of the calendar year over whose pizza reigns supreme.

So while I have my biases, I have a lot of respect for New York style pizza. It’s just that the variety Chicago has to offer (deep dish, pan, tavern cut, etc.) makes it better. But since none of us will ever agree on this, we’ll just let these teams decide. Deal?

The Westgate SuperBook in Las Vegas lists the Bears as 6-point favorites against the Giants with an over/under set at 40.5. The “under” has come in for seven of the Bears’ 10 games, including each of the last four. That is probably your play if you feel the need to place a wager on this one.

The Bears lead the all-time season series 28-21-2, which is nice enough for a .569 winning percentage. Chicago is also 5-3 against its New York counterparts in head-to-head postseason matchups. Take that, you thin-crust-eating hooligans!

Bears Offense: Mitch Trubisky has been given a green light to play on Sunday, but I still have questions about his status. How healthy is he? Will the Bears know if his hip injury stiffens up? How could that injury impact things such as the  game-plan or Trubisky’s improvisational ability? There are more questions than answers, but the only way to find clarity is to watch Trubisky play through whatever kept him out of the end of the game last week.

Bears Defense: Eddie Jackson stripped Todd Gurley II last week and broke a lengthy drought in which he went without a turnover. So if once is good, then twice must be better. Let’s see if Jackson can pick off Daniel Jones, the rookie quarterback who threw eight interceptions in a six-game span before torching the Jets in Week 10.

Giants Offense: Saquon Barkley is a man on a mission and has taken a vow to get back to the player he was last year. No, seriously:

“I allowed … for me not to be me.”@saquon’s bye week pledge to get back to what makes him who he is, and that starts Sunday in Chicago pic.twitter.com/AF2pgdeI7I

Giants Defense: Jabrill Peppers was one of my favorite draft-eligible players in 2017. He was a jack-of-many trades for Michigan’s defense, playing a variety of different spots on the field. More than that, Peppers was a game-changing play-maker. Peppers has yet to live up to his potential, and my hope is that he waits until next week to channel all that upside and potential.