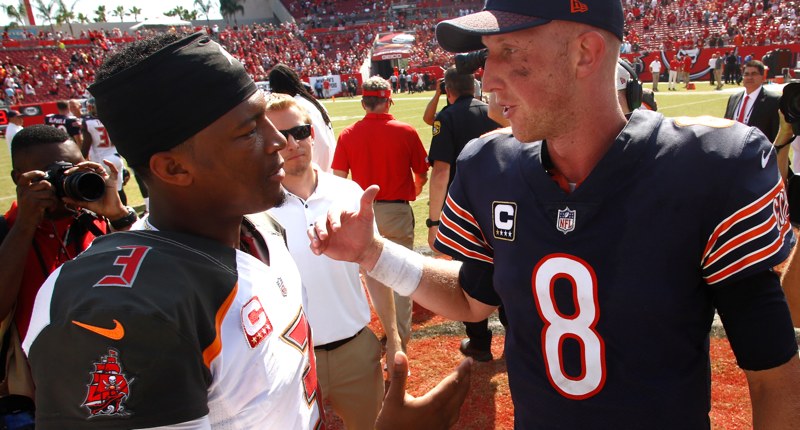 Even though the Bears still have six games to play in this 2019 season, we continue to find ourselves firmly entrenched in looking at future quarterbacking options. Because even in a best-case scenario where Mitch Trubisky turns a corner down the stretch and somehow finishes on a high note, the prudent move would be to bring in fresh arms for competition.

With that in mind, let’s dig in.

Stating the Obvious: Quarterback is a Need

Michael Renner of Pro Football Focus looks ahead to the 2020 NFL Draft needs for each of the NFL’s 32 teams. And in what is a surprise to absolutely no one, the PFF analyst concludes quarterback is the Bears’ biggest need.

Here is what Renner wrote about the Bears’ quarterbacking situation: “Any way you slice it, Mitchell Trubisky is a bottom-five starting quarterback in the NFL. The worrisome thing is that the arrow isn’t trending upwards in any way, shape or form, either.” OUCH! That stings. And to add salt on top of it all, Renner tosses in the knockout blow suggesting that finding a quarterback “looks like a pipe dream” based on where the Bears are drafting. Ugh, I’m gonna need to put my head down for a minute.

You can dive into PFF’s full-blown quarterback rankings here, or focus on the site’s top-5 prospects here.

An Intriguing Path to Cam Newton

In a recent episode of the “Stick to Football” podcast, hosts Matt Miller and Connor Rogers explore the ways the Bears can fix their Trubisky problem. The consensus between the two is that Panthers quarterback Cam Newton (who reportedly would welcome a trade to the Bears) should be Chicago’s top target. If healthy, Newton is a top-tier quarterback who could bring some much-needed play-making ability and swag to an offense that doesn’t have much of either at the position as of right now. And while there is no straight-forward path to such a move, Rogers and Miller talk through the situation.

One idea thrown out by the pod was using one of the 2020 second-round picks to wrestle Newton away. As things stand, the Bears would have the 45th and 54th picks in the 2020 NFL Draft. Chicago should be leery of coughing up its first selection in the upcoming draft since it doesn’t have a first-rounder, but that second pick (54th overall) could be tempting to a team that is seemingly on the cusp of moving away from Newton.

A more outside-of-the-box plan offered up by the duo would be to acquire Newton in a deal that sends a 2021 third-round pick and edge defender Leonard Floyd in a move that would also clear necessary cap room to make such a deal happen. No, Floyd hasn’t lived up to the billing of a top-10 draft pick. But that doesn’t mean he hasn’t been productive. Perhaps a change of scenery for a player in his contract year could be viewed as valuable for the Panthers.

In addition to carving out a trade route for Newton, the “Stick to Football” podcast also unearthed a new quarterback prospect to keep an eye on in the draft.

Even though Georgia’s Jake Fromm received consideration as a possible choice for the Bears’ first second-round pick, Miller and Rogers roll through a mock Bears draft that ultimately sends Washington State’s Anthony Gordon to Chicago with the Bears’ seventh-round selection. Gordon entered Saturday’s action having thrown for 4,314 yards and 39 touchdowns in 10 games. He has averaged 8.4 yards/attempt, completed 71.3 percent of his passes, and has respectable 2.1 percent interception rate. Gordon is described as having a “fun” arm, and working within the complexities of Mike Leach’s high-octane, pass-happy offense should give the Cougars signal caller an edge over most one-year college starters. At minimum, he is the type of late-round flier worth bringing into camp to develop.

James Winston Pops Up as a Free Agent Option

Christian D’Andrea (SB Nation) rounds up a handful veteran quarterbacks the Bears could bring in as an upgrade and replacement for Trubisky. In the piece, we find the usual suspects such as Teddy Bridgewater (who could get the next big QB contract), Andy Dalton (who could be given a clean break from Cincinnati after this season), and Marcus Mariota (who has been on our radar for quite some time, but might make for an awkward fit). But Jameis Winston also makes this list, and I am a bit surprised to see it.

Winston was a Heisman Trophy winner at Florida State and the first quarterback taken in his draft class. Despite making the Pro Bowl quarterback as a rookie, Winston hasn’t taken the proper steps toward being a top-shelf passer. But still … the arm strength and upside due to his ability to push the ball vertically are certainly there. And yet, it would be awfully risky for the Bears to pursue a player  who has the most interceptions thrown since 2015 (Even if he also has the 11th most passing touchdowns in that same span).

Even still, I can’t help but wonder if Winston’s off-field issues would put him off the board before a possible quarterback search begins. Remember, Winston was suspended to start the 2018 season and didn’t get his starting job back until after the Bucs played the Bears in Week 4. Back in June 2018, Matt Baker of the Tampa Bay Times put together a timeline of the investigations, suspensions, and allegations that involved Winston that dates back to November 2012. You’ll want to read up on that for a full scope of Winston’s off-field issues. And because the Bears have stayed away from players with off-field transgressions since the Ray McDonald incident, I am uncertain Winston would be a fit.

In any case, expect options to continue presenting themselves as the focus begins to shift away from 2019 and toward 2020.