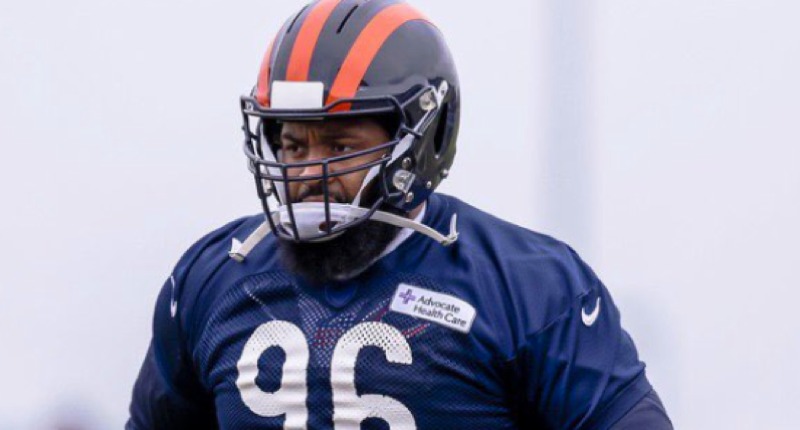 Akiem Hicks has long been an underrated force (well … by those who don’t watch him on a snap-by-snap basis), but those days should be behind us after seeing what the (still-talented) Bears defense looks like without the non-stop engine wearing No. 96.

Soon, Hicks will return to the playing field. And when he does, it will be the first time since suffering the elbow injury that sidelined him for a majority of the Bears’ loss to the Raiders on October 6.

But first, his return to the practice field:

Without live tackling, I imagine it is going to be tough for the coaching staff to tell where Hicks is in his recovery process. But simply seeing him back in the fold as a practice participant for a second consecutive day should lift the spirits of his teammates (while also sending a chill down the spines of opposing ballplayers).

Patrick Finley of the Sun-Times tweeted that Hicks called the recovery process “miserable” and that he was unable to lift the way he used to with his left arm at the outset. ESPN’s Jeff Dickerson adds that Hicks told reporters that making his way back from the injury was a humbling experience.

So how is Hicks feeling now?

Akiem Hicks: “If I can get my body back to a place where I can compete at a high level, there’s nothing that will stop me from getting on the field.”

Wonderful! It truly is nice to see that Hicks is gearing up toward a return, so long as no setbacks get in his way. A healthy Hicks in the lineup is a game-changer. Hicks stuffs the run, hassles quarterbacks, and brings all sorts of intangibles to the table when he is playing. It will be nice to see him on the field, sooner rather than later.