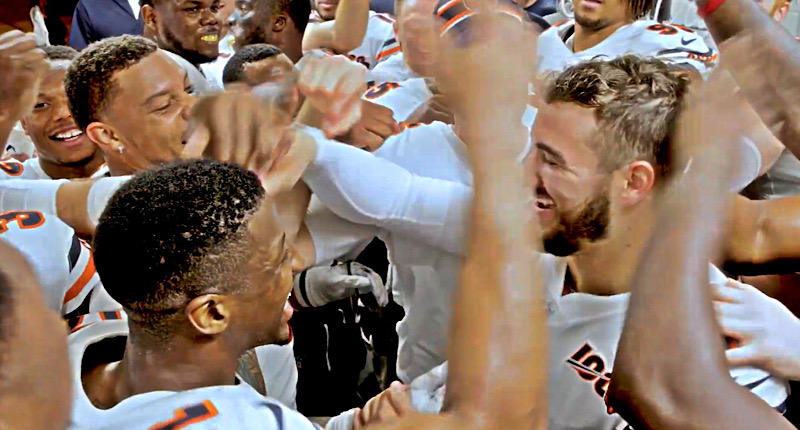 Matt Nagy said it best in his postgame press conference when talking about the stars that shined on Thanksgiving: “Today was Mitch’s day,” Nagy said, via the Bears’ official site. “It was his day. He did a lot of things today in regard to making special throws at special times.”

Now, check out the sights and sounds of Trubisky “bringing the juice” against the Lions:

There was so much love in that video above. And in a season that has had so many dark moments, I can appreciate a silver lining like what was shown (and overheard).

The numbers show Trubisky earned the extra slice of pie and the oversized turkey leg for this performance:

This passing chart had it all:

Deep passes. Throws to the left. And to the right. Accuracy over the middle and on intermediate routes. It is what you want to see more often from the guy who was selected as the first quarterback of his draft class.

And as the folks at Next Gen Stats point out, Trubisky was at his best when the Bears were lined up in 10 personnel. In this particular package, the Bears lined up with 1 running back, 0 tight ends, and 4 wide receivers. I reckon we will see this a lot down the stretch with Trey Burton on the shelf. So even though we know the importance of what a tight end brings to this offense, it is good to know it is still functional and operational with certain packages.

Which was your favorite Trubisky throw to Anthony Miller?

… or this one, which I contend was one of the best throws Trubisky has made in his career:

The latter comes with a nifty graphics package, so let’s highlight that:

Mitchell Trubisky's 32-yard completion to Anthony Miller late in the 4th had just a 23.4% completion probability, his 3rd-most improbable completion this season.

Nearly 45 yards of “Air Distance” on the throw and through a “Tight Window” to make magic happen? Gimme more, please!

The floater to the other Ivy League guy on the roster was pretty neat, too:

Move over, Ford family. Mitchell David Trubisky is the rightful owner of your franchise now:

If he only played against the Lions he'd be an All-Pro.https://t.co/j4B9trIknC

Punch those numbers into a passer rating calculator, and this is what you get:

Can the Bears and Lions hook up more often?

Matt Nagy looking like a proud papa gives me all the feels:

Video of the Year winner, no other candidates needed
pic.twitter.com/jIdbGxk6zb

Not bad for a guy whose brains were probably scrambled after this hit, that didn’t draw a flag because reasons:

Tavon Wilson left his feet and looked like he aimed for Trubisky’s head, should have been ejected #CHIvsDET pic.twitter.com/vcXBrWYjsZ

Let’s be clear with our assessment of Trubisky’s play on Thursday. It was good. For a quarterback who has looked broken in so many moments to put on that show against the Lions was good to see. The timing of it was great. Because for all the stuff the Bears coaching staff has said about the incremental improvements he was making despite the fact that it wasn’t showing up in the box score, it was nice to finally see it on the stat sheet and on tape. Accurate throws with conviction, zip, and velocity. You love to see it! Now, let’s see it again next week. And the week after that. And again the week after that …