The Bears Could Roll with Trubisky Through 2021, But Some Questions Need to Be Answered First Skip to content 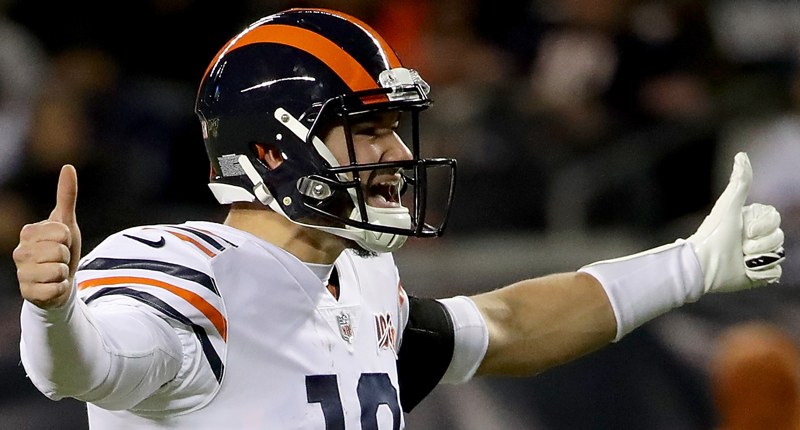 Even though the 2019 season has been a bumpy ride for Mitch Trubisky, one constant through it all has been the unwavering support from the folks at Halas Hall.

The latest example came before Trubisky could even step on the field and dissect Dallas’ defense.

Check this out via NFL Network insider Ian Rapoport:

From our TNF pregame show: When everyone else has doubted, the #Bears have offered full-throated support of QB Mitch Trubisky. The last two weeks, he's rewarded them. pic.twitter.com/2y1juu2yAp

“Every opportunity the Bears brass have had to support Trubisky, they have offered him full-throated support. When so many people were down on him, they certainly were not. In fact, they believe there were many other issues in the offense, including receivers running the wrong routes, issues with the run-game, play-calling, penalties … far more than Mitchell Trubisky. The Bears brass thinks there are plenty of questions to be answered on Trubisky, but they are absolutely in with him going forward.”

This isn’t the first time Rapoport has relayed this message of support from Halas Hall. Back in November, Rapoport reported the Bears had “serious confidence” in Trubisky. In his report, Rapoport said: “[O]ne of the reasons they have it is because they believe it’s not just him on offense. The entire offense needs to play better, they have pre-snap penalties, receivers running the wrong route, run-game issues, coaching issues. Yes, Trubisky needs to play better. But it’s the entire offense that needs to improve.” Nearly a carbon copy of what he shared prior to Thursday’s game. But as always, there is a “but.” And here it is.

Rapoport’s pre-game report last Thursday represents the first time talk of the fifth-year option has surfaced. The Bears don’t have to make that call until next May, but know that it’s projected to be pricy. And while that bridge isn’t going to be crossed until then, it is worth noting that Rapoport seems to feel like the Bears will pick it up — if only because virtually every team that has a first-round quarterback picks up the fifth-year option on the first-round quarterback’s rookie deal. That’s a pretty big deal … as is one other thing that stood out about his report.

Rapoport’s mention that the Bears’ front office “thinks there are plenty of questions” that need to be answered regarding Trubisky caught me off guard – indeed, I had to listen again to make sure I heard it right the first time. If anything, this feels like the first admission that his long-term future (you know, beyond the fifth-year option) is in question.

At least, the powers that be seem to recognize some of the same things we are whenever Trubisky struggles. Ultimately, I still believe the Bears are letting Trubisky use the final four games of the regular season as an audition to make his case to be the unquestioned starter entering the 2020 season.

And as he goes on that journey, he’ll have ample support along the way.

Bears Head Coach Matt Nagy has been effusive in publicly backing Trubisky, especially during the lowest of low-points this season has offered up. Trubisky’s teammates have also piled on the public support. Heck, even when things were rough and receivers were reportedly unhappy with Trubisky’s play, they were still supportive of the third-year quarterback. The first step toward the ultimate reward for their faith and patience might have come in last Thursday’s win against the Cowboys, when Trubisky went off with what was this offense’s signature performance against the NFC East leaders. But if more steps aren’t taken, discussions regarding the future of the position will probably get to another level in 2020.