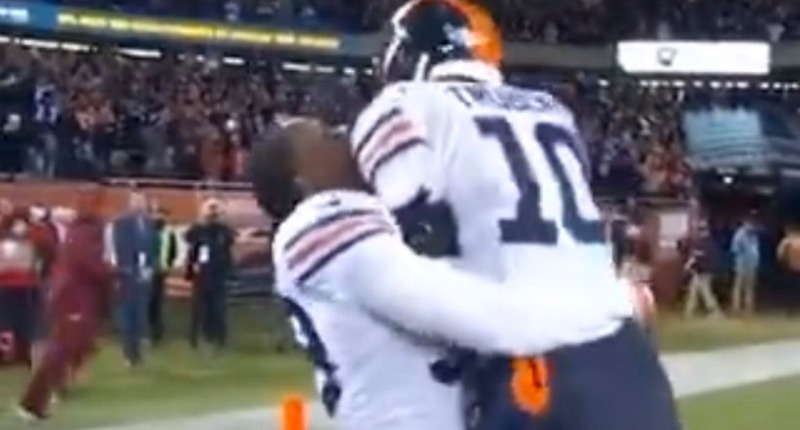 Have you ever realized how much meme potential there is on the safety instructions card on the seat-back in front of you? If you haven’t, well, then this is the Twitter thread you have been waiting to cram your eyeballs with today.

When it comes to Ha Ha Clinton-Dix making his return to Lambeau Field, Bears coach Matt Nagy jokes that it's not that different than when he got traded from the Georgia Force to the Columbus Destroyers, then faced the Force in the conference title game.

#Packers C Corey Linsley on what he expects from Akiem Hicks' return after 2-month absence: "I don’t expect anything but his normal self. He’s a really good defensive lineman, one of the best in the NFL. So we’ve got to be ready for him. I’m not planning on him being rusty."

#otd in 1965, Gale Sayers was simply brilliant, scoring 6 touchdowns as the Bears beat the 49ers 61-20 at Wrigley Field. ⠀ ⠀ Sayers already was a rookie sensation before the game. But when he tied the NFL record with six touchdowns — an 80-yard reception, runs of 21, 7, 50 and 1 yard and an 85-yard punt return — people started wondering whether they ever had seen anything like “The Kansas Comet.” ⠀ ⠀ For more photos and Bears coverage, click the link in our bio. (@vintagetribune photo) #chicagobears #bears #dabears #beardown #galesayers

Mike Brown picks up a fumble and returns it 95 yards for a touchdown as the Bears beat the Packers 21-10 at Lambeau Field in Green Bay, Wis., on Sept. 19, 2004. ⠀ ⠀ The Packers accumulated 404 yards on offense, but the Bears generated 3 turnovers, including 2 interceptions on quarterback Brett Favre. ⠀ ⠀ For more photos and Bears coverage, click the link in our bio. (Jim Prisching photo / @chicagotribune) #chicagobears #bears #dabears #beardown #greenbaypackers #packers #lambeaufield #fbf

A live look at the Raiders rebuild … pic.twitter.com/qhMwhNrkHX

#Vikings DC George Edwards again on list given NFL by Fritz Pollard Alliance for potential head coach Edwards has interviewed before with Chicago, Tampa Bay “He’s ready & I don’t see any reason why he shouldn’t be in the mix for head coach consideration’’ said chairman Rod Graves

Joe Burrow is the best player in college football and the big man on LSU's campus. He also barely ever goes to LSU's campus. https://t.co/5Cp4qYSJFK

That's a wrap on Thursday Night Football for 2019!

RT if your team got a W on TNF this year! pic.twitter.com/R8God71vf5

Everyone wanted a jersey swap with Lamar postgame.

Thaddeus Young Is Reportedly Unhappy With His Minutes and Could Seek a Tradehttps://t.co/xRhAA65DOC

Yes, ownership has noticed the attendance issues, and yes, they're talking about it. (Good.) https://t.co/hGcciGdjMv