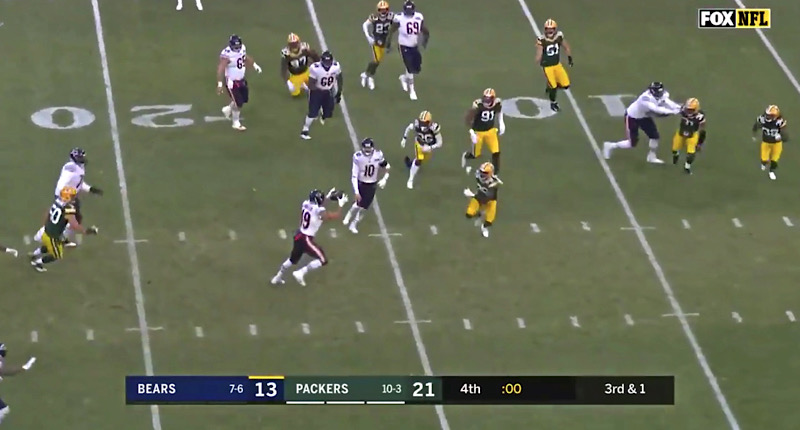 This is how close the Bears were to pulling off one of the craziest, most improbable, and wildest last-second touchdown scores ever:

I’m pretty sure everyone on my block heard me scream “PITCH IT, HORSTED!” at the top of my lungs. But the sound didn’t make it to Green Bay. Because had it happened, a successful pitch to Allen Robinson would have put the Bears in the end zone. They still would have needed to make a two-point conversion just to send it into overtime, but simply getting to that point would have been a miracle in its own right.

In the end, the Bears lost to the Packers by a final score of 21-13. The offensive strides that were made against the Cowboys disappeared for long stretches. And while there were flashes here and there, it was only enough to scratch across field goals when touchdowns were needed. And while the defense welcomed Akiem Hicks back into the mix, two third-quarter touchdown drives by the Packers were enough to put distance between Chicago and Green Bay.

The loss dropped the Bears to 7-7. And while not mathematically eliminated just yet, the Bears are on the brink of seeing their playoff dreams officially crushed. So if you want to hold out that last glimmer of hope, then I would direct you to start rooting for the Chargers (against the Vikings) and Cowboys (against the Rams). Otherwise, our discussions regarding the offseason will begin in earnest.