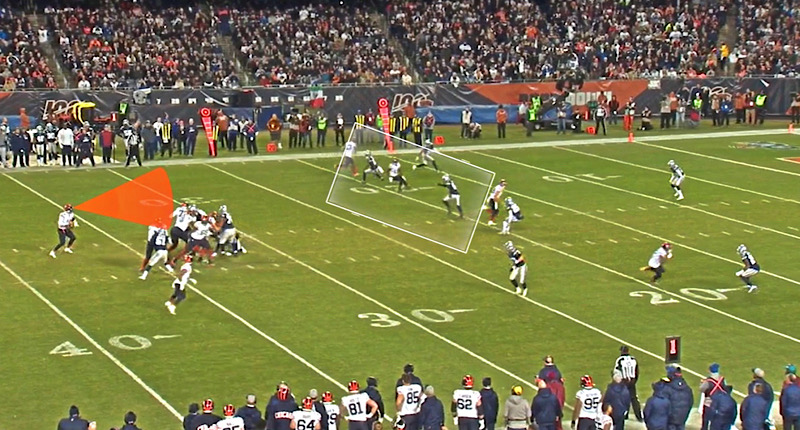 I found myself thinking back to what I wrote after the Bears’ season-opening loss to the Packers.

If you need a refresher, here is a snippet:

The offense looked lethargic and out of sync. It moved without rhythm and purpose, which is troubling for so many reasons. Among them, Head Coach Matt Nagy having seemed to hint at quarterback Mitch Trubisky being better at playing with pace after playing through the first full year in his system, continuing to work at it throughout the offseason training program, and in training camp.

Things have evolved since then, with change for the better coming the last few games for Trubisky and the rest of the Bears’ offense. So much so, even PFF had to acknowledge Trubisky was playing good ball.

Ten days have passed since the Bears played a football game, but the images of a competent passing game are still fresh in my mind. And as Bears radio analyst Tom Thayer points out, the signs of life Trubisky showed last week looked tangible.

This better be the offense. Not just right now because it is conveniently playing well in these particular snap shots. But because the looks in the video above are what was believed to be the core of what a modern offense was supposed to look like.

Nagy fit the play-calling and personnel to make magic happen last week against the Cowboys. The usage of 10 personnel to spread out defenses and isolate mismatches that give Trubisky leverage in throwing lanes is what the Bears should have been playing with from the outset. Using motion to get an indication of what coverages can be, then deploying play action to make defenders freeze (if even for a split second) turned out to work in a big way. This is what many envisioned the offense would look like when Nagy had the starters on that side of the ball skip out on the preseason.

And then there is Trubisky. This is the quarterback who was supposed to show up in Week 1. A playmaker who can slide his feet to extend plays, keep his eyes downfield, and make throws from a set position on one snap, then use his athleticism to throw on the run on the very next play. In the video above, Trubisky showed why sites such as PFF had him ranked as the best quarterback in his class. But the ability to do it on a week-to-week level is what has kept him from being as highly regarded as his draft classmates Patrick Mahomes and Deshaun Watson.

The Bears self-destructed in front of a nationally televised audience in what was supposed to be a coming out party that kicked off a Super Bowl run. Fourteen weeks later, the Bears are fighting for their playoff lives. If they have picked up the pieces and sorted things out, then a win in Green Bay isn’t out of the realm of possibilities. If not, well, we’ll just see how things play out before we finish that sentence with authority.