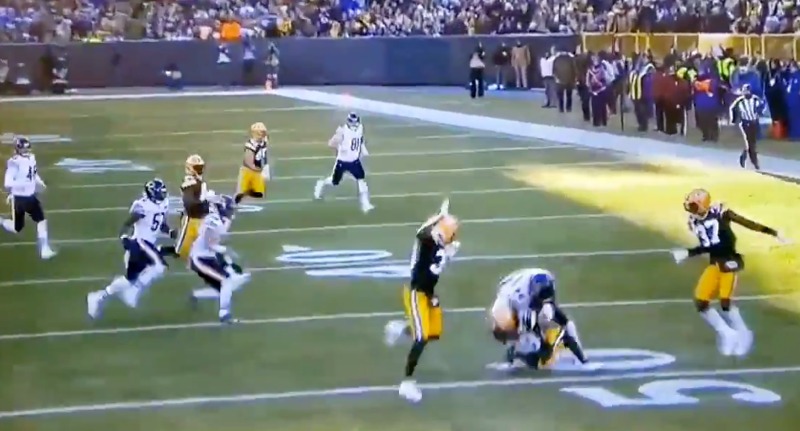 The Cordarrelle Patterson Show is a great to watch every Sunday.

A speedster who can be deployed in a number of different facets of the game, and seemingly has a nose for playmaking. One area where Patterson doesn’t get the love he deserves is in punt coverage, which doesn’t get much TV time unless the unit is getting burned by a returner. But yesterday was different.

Patterson displayed his superb coverage skills on the Bears’ second punt of the day, perfectly timing his hit to jar the ball away from Packers return specialist Tyler Ervin.

PFF’s Sam Monson called it the hit of the year. Check it out:

Cordarrelle Patterson with the HIT of the season!

This should not get flagged, it's a great hit, leading with the shoulder.

Great work as a gunner pic.twitter.com/BS7sCXtEEU

The play should have set up the Bears’ offense with pristine field position.

Well, until it wasn’t meant to be, because officials incorrectly called kick catch interference.

Naturally, Patterson had the best reaction:

And just so you don’t think this is just sour grapes after a Bears loss that put an end to their playoff dreams, here is FOX NFL rules expert (and former NFL official) Dean Blandino with a clear explanation of what was called, why it was called, and why it was the wrong call:

Dean Blandino explaining how the referees gave the Packers a blatant gift. pic.twitter.com/LEu6Pnh6WO

Patterson deserved better. Then again, the same can be said about the Bears’ special teams unit as a whole. Special teams play has been a sore spot for the Bears since Dave Toub left town.

Since Toub’s departure as the team’s special teams coach during the Lovie Smith era, Chicago has been chasing ghosts of the past in hopes of catching greatness. And things were supposed to be different last year, when Matt Nagy hired Chris Tabor — a former Toub assistant. But we all know how that turned out.

In a year mired by the offense taking a step back and the defense maintaining its excellent play more often than not, an improved special teams group has flown under the radar. It shouldn’t, but unless Patterson ends up at the Pro Bowl, it probably will.