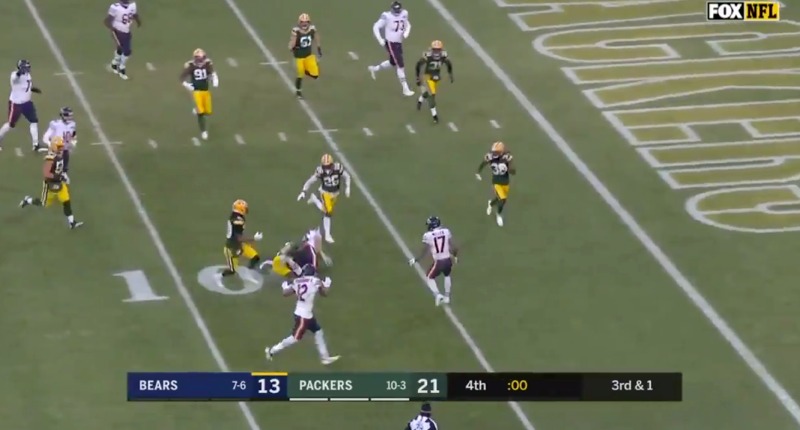 If you thought the final play of the Bears-Packers game was wild, take a glance at how it looked in the official game-book:

Here’s how the final play from Bears-Packers looks in the official gamebook pic.twitter.com/qREHHr3okm

The play itself was a sight to behold, but that whole sequence was a trip. And when you read it out loud, good luck keeping track.

So … what happened here? Well, let’s allow Jesper Horsted to walk us through it:

Horsted: “When I got the ball, the first thing I looked downfield and saw a little bit of daylight, but I knew realistically I wasn’t running that ball in from the 10 or 15. Was hoping to get a few steps…”

More Jesper Horsted: “My goal was always to get it out there because I think we had a better chance out there. I just held onto it a little bit too long."

Again, there is so much going on the play. So while the fan in me wants to be over the top in being upset with Horsted not pitching to an open teammate, this is one of those “easier said than done” situations. It’s not like Horsted wanted to hold onto the ball for the glory of scoring a touchdown. And while Horsted is clear in what his intentions were, he simply couldn’t get it together to make it happen. That stings all over.

Not just for Horsted, but for his teammates, too.

Not only did Allen Robinson’s body language come across loud and clear through the television set, it essentially spoke for Bears fans everywhere.

And he knows it:

Bears' Allen Robinson says you'll see "bad body language" from him on the final play when Jesper Horsted didn't pitch to him. He thinks he would've scored. But he's not mad at all. "It's a tough situation. Once he got the ball… there's a lot going on… Hindsight is 20/20."

Robinson had the angle on what could have been a touchdown that could have put the Bears in position to tie the game with a successful two-point conversion. But because tight end Jesper Horsted couldn’t extend to make a pitch to extend the play, Robinson (and everyone else watching) was left with that sinking feeling.

In the end, we’re talking about a disappointing ending in a game where needing a desperation play like that shouldn’t have even been in consideration. The Bears had plenty of previous opportunities to make plays and score touchdown drives. Settling for field goals when going up against Aaron Rodgers led teams is never a recipe for success. This play is just the latest chapter in that particular story.