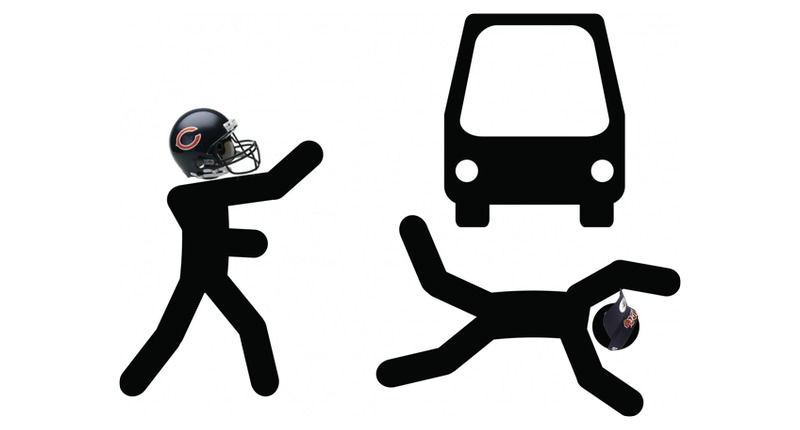 Ten days after appearing in sync while picking apart the Dallas Cowboys defense, the Chicago Bears’ head coach and quarterback were very much *NOT* on the same page in a defeat against the Green Bay Packers.

In Bears QB Mitch Trubisky's postgame press conference, he answered a question about the Packers pass rush with some noteworthy commentary on today's play selection and game plan. pic.twitter.com/Oq90urH7ng

To be clear, I don’t think Trubisky intentionally bus-tossed his head coach there. It’s just that when given any opportunity to place blame on why the offense hasn’t taken the expected leaps forward, Nagy has fallen on the sword and done everything else to avoid placing blame squarely on his quarterback.

And it happened again. Nagy reacted to Trubisky’s comments in his Monday press conference at Halas Hall:

Here's the full 2-picture transcript of what Bears HC Matt Nagy said Monday about whether the Bears could have helped the OL vs. Packers more by design and the fact QB Mitch Trubisky expressed that sentiment in his post-game media session. pic.twitter.com/4jSvmIEviO

But still … Trubisky isn’t wrong to feel that way about the offense. Everything they did so well in recent weeks seemingly went away – the balanced play calling, moving of the pocket, throws to playmakers in space, it was all gone. These are the types of inconsistencies that have been called out all season, but it takes new life when the quarterback — even one who’s had his own issues — points it out.

Trubisky has said all the right things this year, to the point where some of his answers have sounded more canned than candid. But in recent weeks, Trubisky has been more opinionated and expressive regarding what’s happening on the field. And good for him, it was about time he started to speak in something other than football parlance. But of all times to take issue publicly, after a loss to Green Bay that ended your team’s playoff chances didn’t seem right.