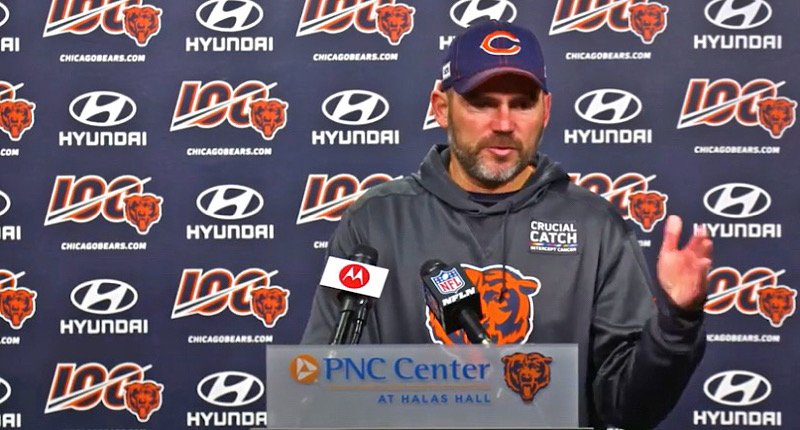 Thursday marked the final installment of the weekly press conferences given by the Chicago Bears’ coordinators during the regular season. Thus, it’s fair to wonder if Thursday represented the last time one specific coordinator spoke to the media as a Bears coach.

Offensive Coordinator Mark Helfrich addressed that possibility during his availability on Thursday:

Mark Helfrich on if he fears changes to the Bears' offensive coaching staff: "You're in this business, stuff happens. That's a possibility."

#Bears coordinator Mark Helfrich said head coach and QB get blamed when stuff goes wrong. That column, he said, could be written all the time. "Copy and paste Coach X and Quarterback Y," he said.

Helfrich acknowledged his job could be in jeopardy once the regular season comes to a close after Sunday’s game against the Vikings.

As you’ll recall, Head Coach Matt Nagy brought Helfrich on as part of the new regime to aid in the development of quarterback Mitch Trubisky. Helfrich’s résumé is littered with offensive coaching experience, but his speciality is/was specifically working with quarterbacks. However, after Trubisky and the offense took steps backward in 2019, Helfrich’s future is now in question.

To be clear, this isn’t an indictment on Helfrich or to place all the blame on his shoulders (Matt Nagy, Mitch Trubisky, and Ryan Pace all share part of the blame). But what often happens in the NFL is that change comes when teams under-perform or do not reach expectations. The Bears set some lofty expectations they were unable to reach, so the reality is that change could be on the horizon for an offense that ranks 29th in yards and 30th in scoring. And even though Helfrich isn’t the play-caller, the offensive coordinator tends to be the guy who takes the fall when things go south.

Perhaps Nagy stands by his guy and gives him a year to turn it around. Maybe Helfrich’s history buys him some time to recalibrate things, make adjustments, and dive head first into a 2020 season that could ultimately be a make-or-break campaign. If not, then the Bears will be in a position to bring a new voice into the room. Clearly, the coach currently in that role thinks that possibility is on the table.