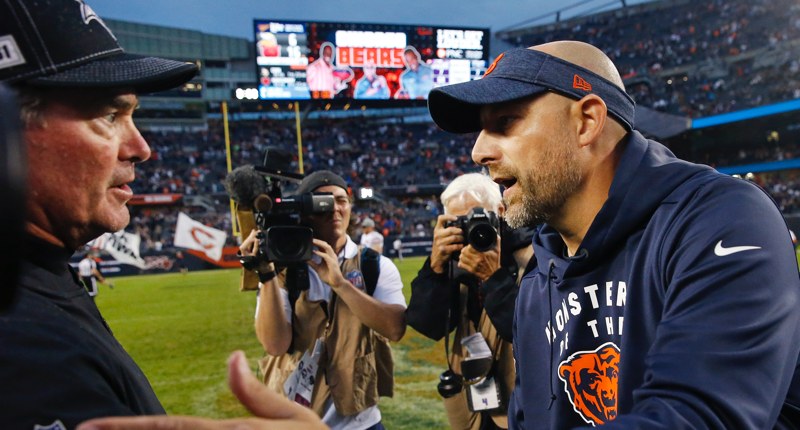 The Bears and Vikings are ships passing each other in the night.

Chicago’s vessel is heading in one direction, with Head Coach Matt Nagy essentially insisting on playing this one as if it matters:

Bears coach Matt Nagy says he plans to play his starters vs. Vikings, with some exceptions due to injury or a guy here or there he wants to get an opportunity. Says he will play his starters the full game and is going for the win.

For some, Sunday’s game will matter. At a minimum, it allows for one more opportunity to put some quality film on tape for next year. Players – whether they will be Bears or ex-Bears – would probably cherish any chance to put one more highlight on the reel for future reference. The same could be said for coaches, who could be scheming for a job in Chicago or elsewhere in football. Sure, the game is meaningless in the NFC North standings. But just because it might look meaningless on the surface, it does not mean it is meaningless for all.

Minnesota’s boat appears to be going the other way:

While I’m told the Vikings haven’t finalized their plan for Sunday, they’re leaning heavily towards resting a bulk of their starters, including Kirk Cousins, per league source. Team viewing Chicago week as a bye in terms of getting guys rest/healthy for Jan.

The Vikings are planning to treat Sunday’s game as a mini bye. Plan is for Kirk Cousins, Dalvin Cook, Eric Kendricks and other starters not to play, according to a source. The Vikings are the No. 6 seed in NFC playoffs regardless of outcome.@CourtneyRCronin had the news first.

Judging by the tone of Head Coach Mike Zimmer, the reports from Minnesota appear to be accurate:

No matter the outcome of Sunday’s game agains the Bears, the home-standing Vikings will have a tough matchup in the first round of the playoffs as the No. 6 seed. So in that vein, I can understand why the Vikings seem OK with simply sitting this one out and treating it like a bye week.

Then again, didn’t they just treat their last home game against the Packers like one?

No? Wait … you’re telling me that’s just how Minnesota plays!

Well, now I’m even more ticked that this team somehow pieced together 10 wins to make the postseason. The Bears and every other NFC team that had championship aspirations entering this season should be ashamed they allowed this Vikings team to enter the postseason fray. For shame.