Yes, I Read the Bears-Pat Fitzgerald Thing, and, No, I'm Not Sorry for the Cold Water Skip to content 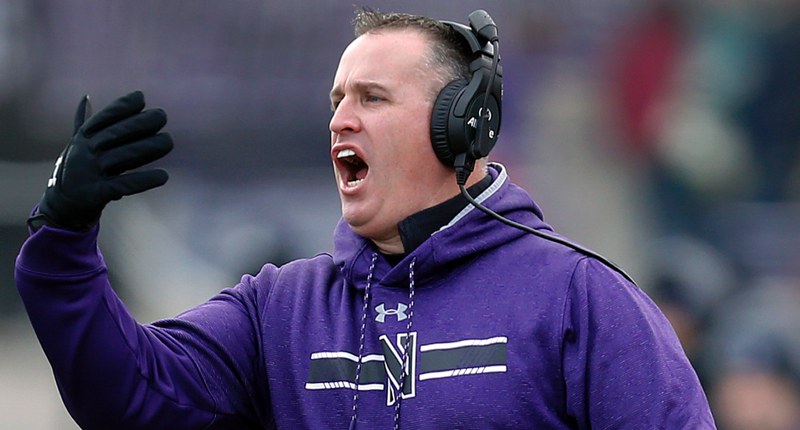 The latest chapter in one of my least favorite football traditions has been published.

You know how it goes. The college football season is in its waning moments, while NFL firing (and hiring) season is on the horizon. And in the surest sign that season is upon us, Northwestern University football coach Pat Fitzgerald’s name pops up on the rumor mill.

Last year, it was the Green Bay Packers who were rumored to be interested in hiring the Wildcats leader to replace Mike McCarthy. This year, Jason La Canfora reports it was the Carolina Panthers who came calling to pitch Fitzgerland on taking his talents from the college to the pros. Fast forward a year, and La Canfora already hears rumblings that Fitzgerald *could* be at the top of the Chicago Bears’ wish list if things go south with Matt Nagy *after* next year.

“There is a strong sense among NFL executives that if Fitzgerald ever did leave Northwestern, it would be for the Chicago Bears job,” writes La Canfora. “He may well end up as a lifer with the Wildcats, but the Illinois native has been linked to the Bears in the past, and Matt Nagy will enter 2020 on the proverbial hot seat after his offense, quarterback Mitchell Trubisky and the entire team regressed significantly this season after reaching the playoffs in 2018.”

One year after winning the NFL’s Coach of the Year award, Nagy being “on the proverbial hot seat” isn’t something I expected to read in 2019. And if the coach being on the hot seat isn’t coupled with the general manager who drafted the quarterback and signed the pieces that were on the underperforming offense and hired the coach, I don’t think a hot seat solely for Nagy makes a lot of sense.

Setting that part aside, we’ve gotta stop reading about Fitzgerald’s potential leap to the NFL. Fitzgerald is a college coach through and through. When La Canfora wrote that Fitzgerald “may well end up as a lifer with the Wildcats,” he could have stopped there.

To be clear, there is no breaking news report here indicating 1) Fitzgerald actually has active interest in a Bears head-coaching gig (we’ve been down that road before) that might not even open up until 2021; or 2) Nagy actually is already on the hot seat. These read more to be merely the musings of an NFL reporter (whose coverage of the Bears has had some memorable misfires in recent years).

And yet, in the end, I felt the need to address this before it got out of hand, because I know where some people might take this.

Now that I’ve done my part (and you have done yours by reading), let’s go out and enjoy the rest of our Saturday.