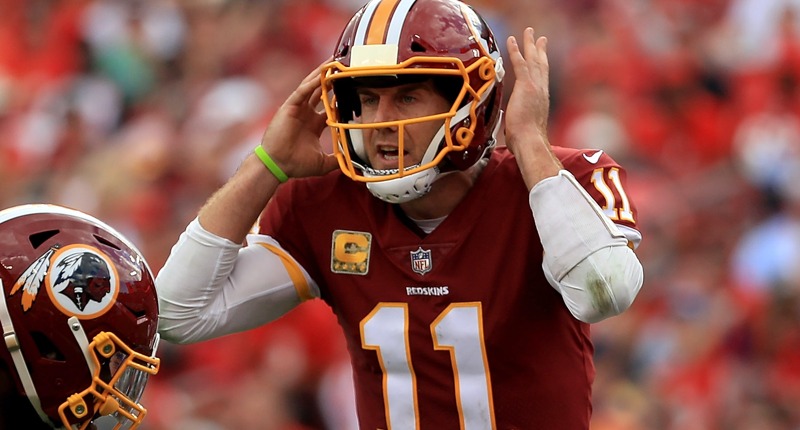 Alex Smith suffered one of the most gruesome leg injuries I’ve ever seen in football back in 2018. It was so bad, that his future as a football player has been mostly an afterthought. And yet, here we are a little more than a year later and Smith still wants to suit up and sling it next year.

Alex Smith says “without a doubt” his plan is to return to the football field pic.twitter.com/rsJnASp0wf

In addition to returning from an awful injury, the other hurdle Smith must clear in Washington is competition. As things stand, Smith would be behind Dwayne Haskins on the quarterback depth chart in our nation’s capital. And because you can’t rule anything out, it wouldn’t be out of the question if Washington rolled the dice on a quarterback with the second pick in the 2020 NFL Draft.

At this point, you might be wondering where that leaves Smith’s future.

If Alex Smith can play football in 2020, I would expect it to be in Chicago.

The idea of Smith joining the Bears isn’t far-fetched if you really put your mind to it:

And Alex Smith, in his one year with Matt Nagy, was REALLY good. There's certainly concern about physical decline between then and now, but that history in this offense, with this coach, is certainly worth noting.

A connection to Head Coach Matt Nagy? Check. Superior knowledge of the offensive system in place in Chicago? Double-check. A short-term commitment that could be more cost-effective than options elsewhere? Uh-huh.

Bringing Smith onto a team that has Super Bowl aspirations isn’t the whackiest idea out there, but only if he gets a completely clean bill of health to do so. As stated above, that injury ranks as one of the all-time bad ones I have ever seen. And that he will enter his age 36 season in May serves as a reminder that the clock is ticking on Smith’s career.

But still … a short-term option with intimate knowledge of how to properly operate a successful version of Nagy’s offense would be nice to have. And to take it a step further, teaming Smith with Mitch Trubisky, and a possible draft pick could make for the type of summer-time quarterback battle that could open up a window to something far better than what we experienced in 2019. And yet, because we’re still in the early stages of this trail, this seems like a good place to pump the brakes.

Between getting clearance from a health perspective, trying to figure out where he could fit under the cap, and what Washington could ask for in a trade, there are a great many hurdles for the Bears to clear if they were to get involved. But let’s keep Smith’s name in the back of our mind as this offseason develops, as there is a chance we could be circling back to him at some point down the line this offseason.