Chase Daniel Sounds Off on the Bears' Offense, Nagy and Mitch, and What Could Be Coming Next Year Skip to content 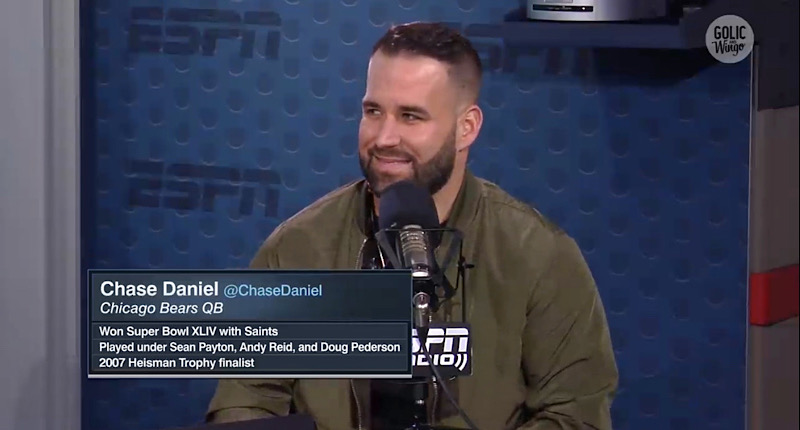 And I’m not sure there are many who understand the complexities of the Andy Reid/Doug Pederson/Matt Nagy offense like Daniel, who’s spent six years in it as a backup. So when Daniel speaks up on what happened with Trubisky, the offense, and what could change as part of the future, I’m all ears.

Daniel spent two hours with the Golic and Wingo Show on ESPN. And while there wasn’t two hours of Bears talk, Chicago’s QB2 took some time to chime in on a variety of Bears-themed topics. I have taken the liberty to highlight a few excerpts, while adding my own commentary.

You can check out the whole segment here, as well as the Bears-centric snippet in a video embedded below.

There was a mid-season surge in Trubisky’s season that appeared to provide a flicker of hope that he could perhaps turn the corner this season. The five-game stretch that started with the Lions win at home featured Trubisky completing 66.5 percent of his passes, averaging 244 yards per game, throwing more than twice as many touchdowns (11) than interceptions (5), and posting a 95.4 passer rating. Those numbers were somewhere between (1) the expectations for Trubisky this year and (2) his production last season.

But why was it just a five-game blip? Daniel’s explanation follows.

“The main thing, if you look at it, is the aggressiveness of the play-calling. Matt sort of got on the same page as Mitch, and started trusting him more, whatever it is, our offensive line blocked a little better, and you started seeing some balls go down the field. Is it where we want to be? Absolutely not. … That’s really not an Andy Reid, Matt Nagy, Doug Pederson type offense. So, I think there was an ownership the last eight weeks of the season of Mitch and the offense. I felt like the relationship between Matt and Mitch got a lot stronger as the season went on. They started spending way more time together. At any level, the relationship between the play caller and the quarterback is probably the most important on the football field.”

Daniel certainly hit it on the nose when he said what we saw wasn’t the type of offense fans have come to expect from a coach who came from the Reid/Pederson tree.

Although, learning that the relationship between Trubisky and Nagy improved as the year went on is encouraging, especially since Daniel makes a reference to Nagy giving Trubisky a longer leash and trusting him more. Did the numbers end up in the Bears’ favor when it happened? Outside of that five-game run, no. But evidently there was some trust that needed to be built with the coach-quarterback relationship.

AN ADMISSION OF REGRESSION

Ugh … that word again. The fall-back verbiage for everyone who claims to have seen the Bears’ short-comings come from miles away. Regression. But unlike some who just throw the word out there as some sort of catch-all “gotcha!” moment, Daniel provided some perspective as to why it happen, instead of just that it happened.

“If you look at the over-arching theme of the season, it would be regression. However, if you look at it game-by-game, there’s really like 20 games in a 16-game season that we want back. Those 20 plays go opposite, you can be 13-3 or 12-4. The first year with Nagy, all those plays went for us. It seemed like all those plays this year went against us. As you know, a football is a game of inches and it just really wasn’t our year this year.”

Daniel is right. If you look across the board, the over-arching theme of the year was regression, specifically due to missed opportunities. I’m certain you can highlight any number of plays that went against the Bears in 2019 that went for them in 2018, in part because I lost count of moments that had me like “the 2018 Bears make that play.” Whether it was a missed throw, a penalty that pro-longed an opponent’s scoring drive, an inability to get a stop on third or fourth down, a missed kick — OK … maybe not so much that, but I feel as if you get my gist.

AN EARLY LOOK INTO THE OFFSEASON

The most interesting nugget that Daniel offered up is how the Bears were looking to get better in the offseason. That plans for 2020 worked into motion shortly after their elimination from postseason play is good news, as were Daniel’s insight into how the Bears were viewing things at the end of the year.

This is where the fun begins for the Bears. Self-assessment as to what went wrong and right is tip-of-the-iceberg stuff. Deeper dives into what the offense needs to get into from a schematic standpoint is far more interesting. As is the notion that the Bears are going to jump into concepts they can copy from successful teams. That Daniel offered up running concepts similar to the ones that Baltimore uses to free up Lamar Jackson is quite intriguing. Indeed, it will be an interesting offseason for the Bears.