Kirk Cousins Finally Gets His Signature Win. Whatever. And Other Bears Bullets Skip to content 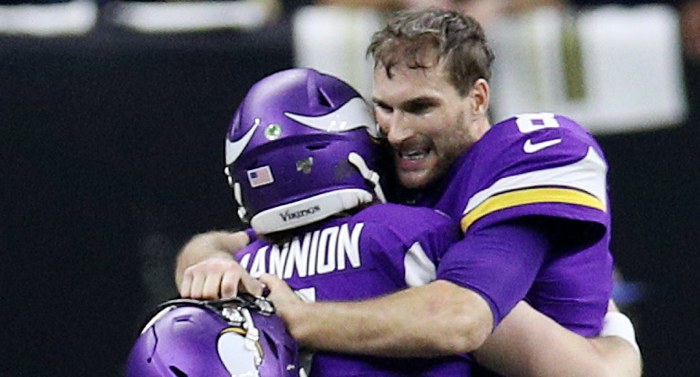 There is time carved out of every Sunday for me to plan my week ahead. Yesterday was no different, but today I woke up with a pounding headache that kept me in bed for hours after I intended to get up. It was painful. But after finally pulling it together after breakfast and some morning meditation, I feel better. Now, let’s see if it can last for the whole day.

Cousins defeated the 13-3 Saints in the 2019 Wild Card on the road in overtime.

Saints are now the first team in NFL history to have six straight playoff eliminations by one score and the second team since the Packers from 2013-15 to be eliminated in three straight postseasons on the final play of the game.

You know what would help the NFL?

A rule that allowed them to review PI. Maybe someone should propose it this offseason to prevent officials from ruining playoff games. pic.twitter.com/u7OPL1xbz7

It is illegal for an offensive player to extend his arm or arms and create clear separation from the defender. That was OPI. #MINvsNO

NFL’s Senior VP of Officiating said there was not enough contact on Vikings’ final TD to rise to the level of a foul. pic.twitter.com/fZxaiXOY4L

Taysom Hill is QB3 on the Saints depth chart. pic.twitter.com/bzLjNRAObC

This is the hit that sent @cj_wentz to the lockeroom with a head injury. He’s questionable to return. Looked dirty to me #Eagles pic.twitter.com/2W49OmtIDZ

Congrats to “lil” bro @Ky1eLong. I could go on + on about how proud I am, how I loved watching you or how much I respect your wildly successful career – but remember, I’d be proud of you even if you never played a down. Congrats on ONE chapter. On to the next thing. Love u bro!! pic.twitter.com/N2KqxQAKgZ

Here we go with these damn @DallasCowboys pic.twitter.com/TfqvamimyI