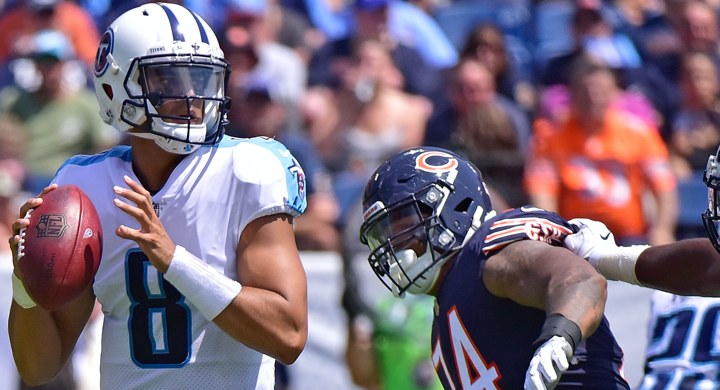 In some way, shape or form, change is coming to the Chicago Bears’ quarterback position.

Because even as GM Ryan Pace expressed the expectations that Mitch Trubisky would enter the 2020 season as the team’s starter, he also was quick to point out that – at a minimum – the Bears had two open spots on the quarterback depth chart. Presumably, those spots will be used to create competition that would push Trubisky in the final year of his rookie deal. And if that is the case, the time is now to begin exploring those possibilities.

Among them is Titans quarterback Marcus Mariota, whom one NFL executive seems to have pencilled in as heading to Chicago.

ESPN’s Jeremy Fowler reached out to some league executives, who shared predictions for this upcoming offseason. One of the executives envisioned the Bears as the team that would sign Mariota this offseason as part of the shakeup in the Bears’ quarterbacks room. And while it is a bit of a surprise to see Mariota as that guy for the Bears, this executive’s reasoning as to why he made the prediction is sensible:

“I could see Chicago [for Mariota]. Ryan Pace wants to stick with Mitch [Trubisky], and this way Mariota can start games but isn’t a total replacement, leaving room or Trubisky to regain his confidence and play well.”

This league executive has laid out a plan of attack for the Bears to add competition and a possible short-term replacement for Trubisky, without someone whose presence isn’t threatening enough to damage QB1’s psyche as he tries to rebuild his confidence following a season of shortcomings. And if the formula above sounds even a little bit familiar, it is because it is essentially the same line of thinking the Titans used in bringing in Ryan Tannehill (the No. 8 pick in the 2012 NFL Draft) as Mariota’s backup last offseason. And we all see how that has worked out.

What makes Mariota’s name pop up on the rumor mill at this point of the offseason a surprise is that the Bears removed Mark Helfrich from his post as offensive coordinator. Helfrich was Mariota’s head coach at Oregon the year he won the Heisman Trophy before landing as the No. 2 pick in the 2015 NFL Draft. The idea of Mariota coming to Chicago seemed to make a lot more sense with Helfrich greasing the skids, but I suppose that buffer isn’t totally necessary.

Here’s the thing about Mariota: He was a No. 2 overall pick whose development stalled in Tennessee, which is going to draw unavoidable parallels to Trubisky. But in theory, Mariota is the type of signal caller with a unique prospect pedigree who could provide legitimate summertime competition to the incumbent starter, while also bringing upside to the position as a backup.

Again, change is coming to the Bears’ quarterbacks room. No one knows exactly how the Bears will go about shuffling the cards, but at least one league executive has an idea. And an idea is nothing more than a humble beginning on what will be quite a journey this offseason.

(Michael: For what it’s worth, I’m fine with this sort of move to push Trubisky in the short-term, but I still expect/hope the Bears to be thinking more long-term at the position when the 2020 NFL Draft rolls around. There are some interesting options, after all. Let’s walk and chew gum at the same time, yes?)