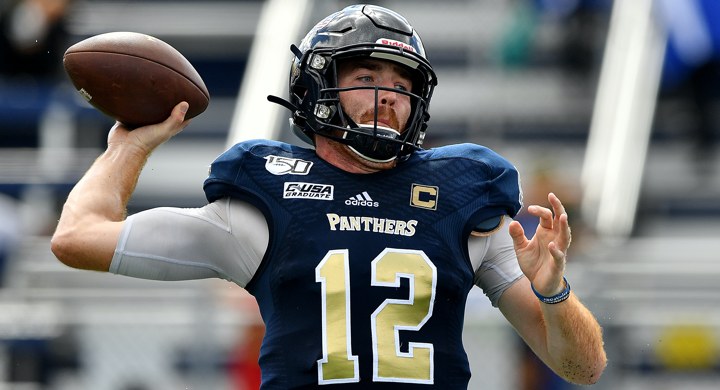 With the college football season behind us, draft-eligible prospects have started making their way to post-season showcase games.

Among them is the East-West Shrine Game, which features one quarterback prospect the Chicago Bears have already met with this week:

NFL reporter Aaron Wilson tweets the Bears were among the teams who met with Florida International quarterback James Morgan, who is an intriguing quarterback prospect for any number of reasons. And while we can talk about a break-out 2018 campaign (26 TD, 7 INT, 65.3 completion pct.),  a respectable follow-up season in in 2019, and measurables (6-4, 213 pounds) that traditional pro quarterbacks have, I can’t get past the anecdote offered up by NFL.com writer Andy Fenelon, who is covering the East-West Shrine Game, and I think you’ll quickly see why.

In short, Fenelon notes that Morgan is a Green Bay native who wore No. 4 as a youth football player, then changed to No. 12 in high school. That’s because Morgan was a Packers fan who idolized Brett Favre and Aaron Rodgers growing up. Morgan switched from 4 to 12 as he entered high school and hasn’t changed his number since. He is even wearing it during Shrine Game practices this week. Shrug.

But whether or not the kid’s a cheese head, he’s clearly pretty good. When asked who happens to be the best quarterback doing work on the practice field, “No. 12,” said one scout who spoke with Fenelon. “And it’s not even close.”

WELP, if that doesn’t inspire me to set my DVR to record the Shrine Game, nothing will.

Of course, as of now, Mitch Trubisky isn’t going anywhere. Sorry to burst your bubble if that’s where you thought this was heading. But because there are two open spots on the depth chart (with Chase Daniel and Tyler Bray set to hit free agency), new blood will be injected into the mix this summer.

One way for the Bears to bring a new look to the room will be through the draft. And even though Chicago isn’t picking in a place to select an elite talent, it doesn’t mean the front office can’t find a diamond-in-the-rough elsewhere. In fact, an early meeting with an intriguing prospect suggests the search for help to bolster the room is well under way.