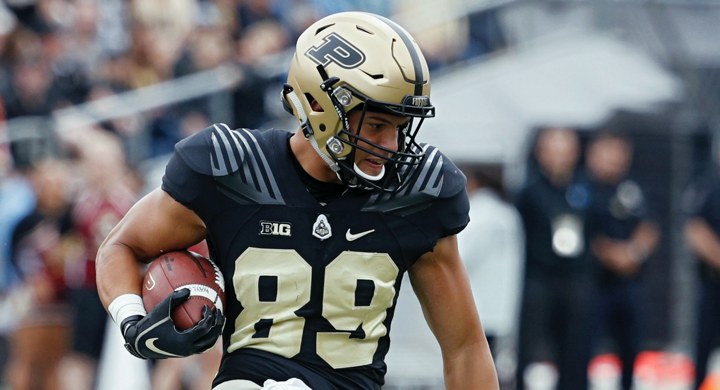 Players selected in the 2020 NFL Draft will be transported to a stage on the water at the Fountains of Bellagio by a boat. No, really.

Perhaps when the Chicago Bears go on the clock, one of their picks will be one of these tight ends they met with at the Senior Bowl:

Jared Pinkney, TE, Vandy, told me he met with the #Bears for over 30 minutes. #NFLDraft

#Bears are doing their homework on TEs. Brycen Hopkins just told me he, like Pinkney, has met with Chicago.

Purdue’s Brycen Hopkins and Vanderbilt’s Jared Pinkney have already confirmed their respective meetings with the Bears, per Bryan Perez of NBC Sports Chicago.

Hopkins was a pass-catching machine for the Boilermakers, hauling in 61 catches, picking up 830 yards, and scoring seven touchdowns en route to first-team All-Big Ten honors and winning the Big Ten’s Tight End of the Year award. Benjamin Solak of The Draft Network views Hopkins as “a Day 2 candidate for a team looking for a primary target at the TE position who can create explosive plays up the seam or after the catch.”

Hey! I know a team that is looking for exactly that in a tight end prospect. What a world!

Pinkney had a down year as a senior (20 catches, 233 yards, two touchdowns), but is still perceived as a top-flight tight end prospect of this class. As recently as October, ESPN’s Todd McShay had Pinkney ranked as the class’ No. 1 tight end prospect and 22nd ranked player overall. And back in August, Pro Football Focus’ Michael Renner projected Pinkney as a potential first-round pick. Again, Pinkney’s senior year wasn’t much to write home about. But Jonah Tulles of The Draft Network writes the Vandy product “clearly passes the eye test” and “possesses the size, muscular frame, and physical traits” teams seek in a tight end. The Bears could use some physicality at the position, to say the least.

The Bears have a tight end problem. And when a team has an issue as glaring as the one facing Chicago’s tight end room, addressing the issue with a draft pick is often the best way to go about fixing it. With that in mind, it is good news to read that the Bears have already met with a pair of this upcoming draft class’ top tight ends. But I have a feeling this is just the beginning.