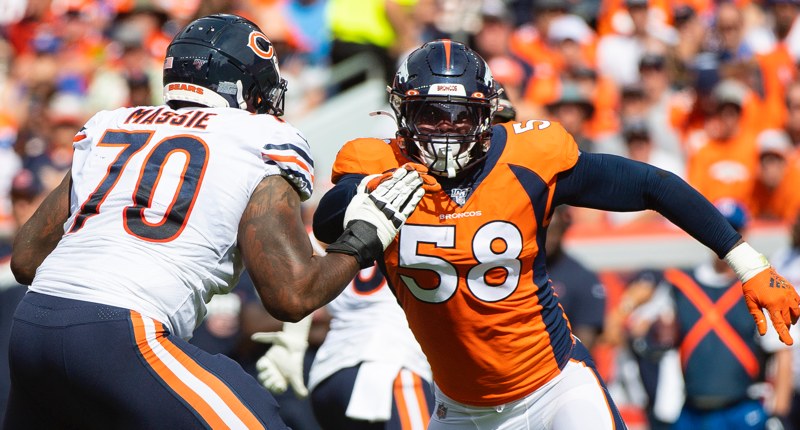 August of 2018 was a simpler time for Chicago football.

Back then, the Bears and Broncos were holding joint practices in Denver ahead of their preseason showdown. And among the items to come out of that practice period were some encouraging words from Broncos star pass-rusher Von Miller regarding Bears quarterback Mitch Trubisky: “With the offensive scheme and the players he has around him, he’ll be great,” Miller said. “He’s a franchise quarterback.”

As I wrote at the time, if anyone knows quarterbacks, it’s a guy who sacks them as often as Miller has while lining up in those particular shades of blue and orange.

But while his prediction hasn’t come true just yet, Miller’s latest on Trubisky is something you’ll want to hear for yourself. No, Miller doesn’t double down on his original proclamation, but he clearly still has hope for Trubisky’s future.

.@VonMiller knows the good QBs from the bad ones, and he still believes in Mitch pic.twitter.com/5bIuCrU1xz

Here’s the kicker line: “I know quarterbacks. I sack them, and I can see them. I know the good ones from the bad ones. Mitch is definitely not bad.” ZING!

Who knew that the president of the Trubisky fan club would be an all-time great pass-rusher? And who would’ve thought it was one who he didn’t practice against on a weekly basis.

Von Miller still believes in Mitch Trubisky, which is interesting as a standalone comment. But that Miller talks about Trubisky’s good spurts and potential, as well as an admission that he isn’t a finished product is the type of clear-brained, fresh perspective that is appreciated after a year where the quarterback’s flaws and short-comings were highlighted and exposed at every turn.

The Bears still figure to bring in competition at the quarterback position by way of players behind him on the depth chart to replace Chase Daniel and Tyler Bray. But if Trubisky is as good as Miller thinks he can still be, then Trubisky should handle all on-comers without much of an issue.