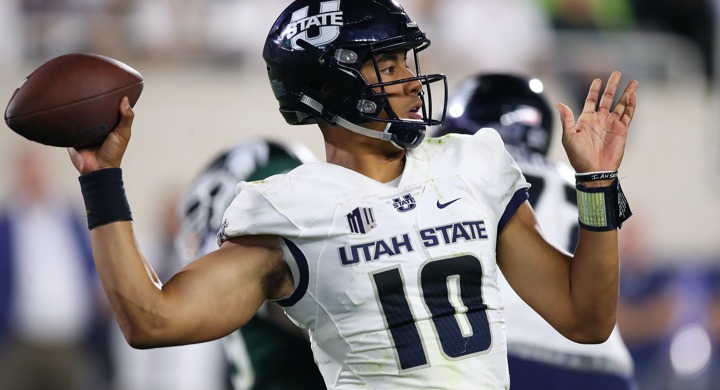 It’s early in the process, but Utah State quarterback Jordan Love is making his presence known at the Senior Bowl.

So much so, we can’t help but pay closer attention:

Haven't been impressed by any of the QBs as consistency is a big issue for all, but Love been the best today

Some great insight here from #Lions OC Darrell Bevell on the challenges of playing QB at the Senior Bowl and what he's seen from Utah State's Jordan Love. @nflnetwork pic.twitter.com/nThVSkTGLX

Size, arm strength, confidence, the ability to successfully make off-schedule throws from different platforms, a cool name … it’s all part of the Jordan Love buzz that’s hovering around folks at the Senior Bowl. And it’s probably not going to slow down any time soon. Not when there are Patrick Mahomes comps to be had out there.

“Both (of us) have strong arms. He obviously can make some ridiculous throws, off-schedule (throws) and stuff like that,” Love said, via NFL.com’s Chase Goodbread. “It’s something I’ve seen and tried out with my game, being able to make throws like that. I hope to be on the same platform as him.

Obviously, every and any team in search of a quarterback should be on the look-out for the next Mahomes. But to unearth that next diamond in the rough, a team has to be willing to show patience, a willingness to work with a young quarterback who needs guidance before stepping into a starting role, and the aptitude to work through kinks such as mechanical flaws and decision-making process. It’s all a balance – and a gamble – on the upside.

Those were the very issues Mahomes was docked for when he was a prospect.

Now, this isn’t to say the Love-Mahomes comparisons are fair. They’re not. But to find the next Mahomes, teams need to be more open to taking risks on talent and upside while spitting in the face of conservatism and conventional wisdom – something of which NFL front office executives aren’t particularly fond.

Love has been projected to go all over the board during the pre-draft process. He has been mocked to go as early as the middle of the first round (booo) to any point in the second (hoooray!).

A strong showing throughout Senior Bowl week will only increase the buzz surrounding Love as a prospect. And if it continues, the conversation will likely shift from exploring the possibility of taking Love on Day 2 to discussing whether or not he is worth trading into Round 1 to select. In any case, this is just the beginning for Love, who continues to be a prospect worth keeping tabs on as the 2020 NFL Draft approaches.