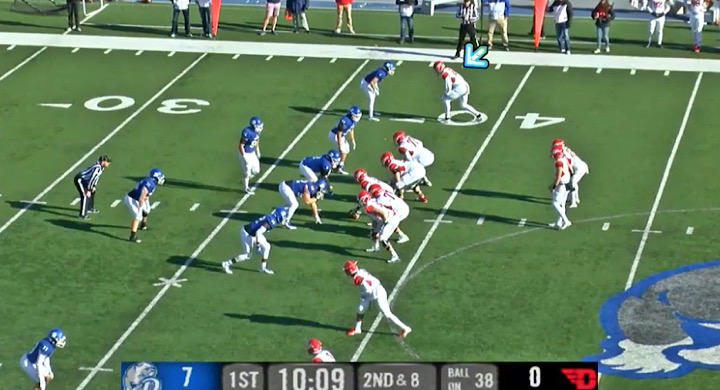 The Chicago Bears made it known that fixing the tight ends room was going to be a priority.

So much so, they sought out interviews with top prospects Brycen Hopkins (Purdue) and Jared Pinkney (Vanderbilt) earlier in the week. But you can expect for that to be just the tip of the iceberg, as sleeper draft candidates will surely make their way onto the Bears’ radar. In fact, one already has.

In addition to Hopkins and Pinkney, NFL.com’s Chase Goodbread reports Dayton’s Adam Trautman has been in “high demand” on the interview circuit this week. Among the teams who have a keen interest in Trautman is the Bears, who Trautman, himself, is said to have shown strong interest in him. So he should be on your radar.

But before you start flashing back to Chicago’s selection of Adam Shaheen in the second round of the 2017 NFL Draft (because both played at smaller schools in Ohio), please note that Trautman is a different player at every level of evaluation.

Unlike Shaheen, a failed basketball player at Division II Ashland University, Trautman has been a full-time football player since arriving on Dayton’s campus. And early scouting reports have him as more of a polished route-runner and blocker, which makes sense considering his longer commitment to football and the Football Championship Subdivision providing better competition than what is often found at the Division II level.

Check him out at the Senior Bowl:

I am a HUGE Adam Trautman fan (Dayton TE). He has a really good feel as a route runner and he’ll more than hold up in the run game. pic.twitter.com/zaTuBXzobf

ADAM TRAUTMAN (TE, Dayton) was the star of Thursday’s practice with his receiving skills….BUT, I liked his blocking. pic.twitter.com/QhED5Cq5G3

Nice burst at the top of the route by Dayton TE Adam Trautman. Extends away from his body to make an impressive hands catch. pic.twitter.com/wrgrbzd5pb

The Athletic’s Dane Brugler raved about Trautman earlier in the week, writing that the Dayton product was “physical with the football during practice, relying on his frame and toughness to finish catches.” He even called Trautman a top-75 overall prospect.

Meanwhile, Bleacher Report’s Matt Miller believes Trautman is the type of prospect teams  should have their eye on, if they’re looking for an in-line tight end. No doubt, being a big, physical player with a willingness and ability to block helps his case. And since the Bears are looking for an in-line (or “Y”) tight end, perhaps Trautman deserves a closer inspection — especially if he is passing the sniff test from the likes of respected draft gurus such as Daniel Jeremiah and Dane Brugler.

Unfortunately, comparisons to Shaheen will be hard for some Bears fans to shake. But the small-school stigma/position shouldn’t be a deal-breaker – not for a franchise that’s seen a number of stars from non-football powerhouses come through Halas Hall and become solid pros. With that in mind, let’s keep tabs on what happens with Trautman as we move through the draft process.