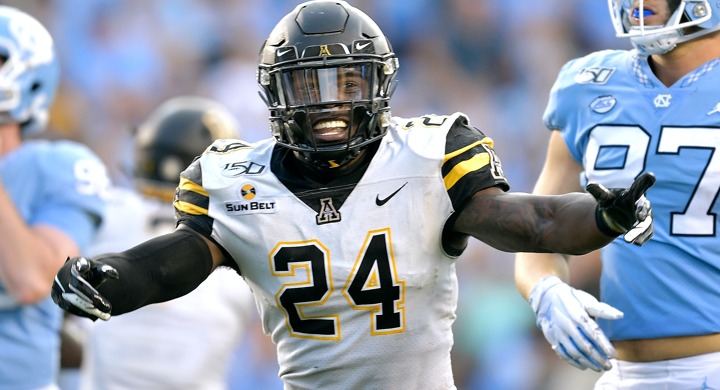 Among the issues that must be cleared up before the start of next season is inside linebacker, where the Chicago Bears have three pending free agents.

With that as our backdrop, there should be no surprise as to why the Bears have met with two of the top inside linebacker prospects at the Senior Bowl.

Earlier in the week, Bryan Perez of NBC Sports Chicago reported the Bears met with Akeem Davis-Gaither. Senior Bowl executive Jim Nagy shared some news about Davis-Gaither earlier, noting that the Appalachian State product was voted as the South Team’s top linebacker during practice by those who competed against him. That’s pretty solid praise, as is the news that Davis-Gaither made the “Most Impressive” list by Jordan Reid of The Draft Network. Davis-Gaither’s stock should have been high to begin with after racking up 104 tackles, 14.5 tackles-for-loss, and five sacks for the Mountaineers last season, but it will only climb after an impressive performance during Senior Bowl week.

Of course, he wasn’t the only standout inside linebacker the Bears met with during the week. Charlie Campbell of Walter Football shared a report of the Bears meeting with Wyoming’s Logan Wilson on Tuesday. Wilson was a second-team All-American (USA Today), first-team All-Mountain West selection, and an accomplished linebacker for the Cowboys that impressed The Athletic’s Dane Brugler. A strong showing in the  Senior Bowl could do wonders for Wilson’s stock, as Brugler notes that the linebacker prospect is worthy of consideration of being a top-100 pick.

Davis-Gaither and Wilson are the types of prospects the Bears need to keep tabs on throughout the pre-draft process, so getting them in the interview room now should be viewed as an important first step. Because while Trevathan, Kwiatkoski, and Pierre-Louis each played well enough to merit contract extensions that keeps each in Chicago, the Bears can’t re-sign everyone. And considering their projected need to spend to fill holes elsewhere in free agency, bringing in a linebacker who could possibly start next to Roquan Smith while on a rookie-scale deal could be a net positive in the grand scheme of things.