Eddy Piñeiro Might Be the Kicker in 2020, But the Bears Still Visited Georgia's Rodrigo Blankenship Skip to content 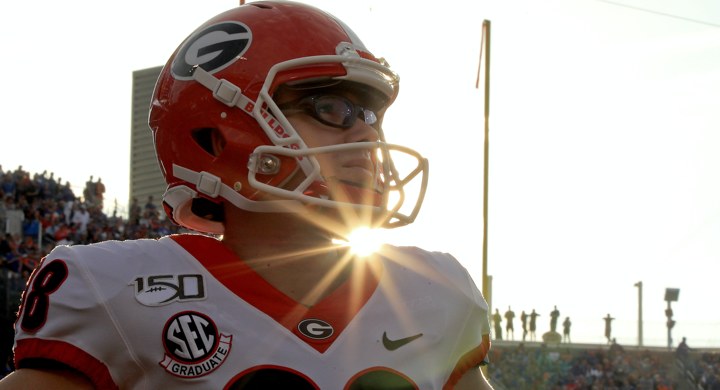 In case you didn’t know, Zack Pearson (Bear Report) does a great job of tracking the Bears’ prospect meetings, creating an expansive list of draft-eligible players Chicago has already talked to at this point in the process. And while they’ve already held notable meetings with players at positions of need (such as wide receiver, tight end, linebacker, and defensive back), meeting a trio of specialists at the Senior Bowl stands out above the rest for now.

Indeed, in addition to kicking the tires on LSU long snapper Blake Ferguson and Texas A&M punter Braden Mann, the Bears are reported to have chatted up Georgia place-kicker Rodrigo Blankenship. And that’s certainly an eyebrow-raiser. So let’s talk about it.

Blankenship’s college career at Georgia was a decorated one. He kicked his way to becoming the best kicker in this class, winning the Lou Groza Award and earning first-team All-American (USA Today) in 2019. Not bad. Blankenship also is a two-time All-SEC honoree (2018 second-team, 2019 first-team), owns the longest field goal in Rose Bowl history (55 yards), connected on 82.5 percent of his field goal attempts, and made each of his 200 extra-point attempts. Heck, that’s pretty good.

Of course, the Bears already have a kicker, right?

After missing 4 of 8 field goals in a six-game stretch in the middle of the season, Eddy Piñeiro rebounded by making each of his final 11 kicks to close out the year. It was a noteworthy streak that ended with a game-winner against the Minnesota Vikings in Week 17. However, upon closer inspection, it may not have been quite as impressive as it looks on the surface:

Even still … Piñeiro’s ability to bounce back in a season in which he had major issues was commendable. That he rallied to make a strong case to be the Bears’ kicker in 2020 probably earned him some points from the shot-callers at Halas Hall.

And this is what makes Chicago’s meeting with Blankenship a curious one.

Piñeiro finished the year connecting on 82.1 percent of his field goals. And because of that, the vibe at the end of the season was that the 2020 gig was his to lose. And yet, I can’t imagine a scenario in which the Bears have Piñeiro as the lone leg in camp. And so I’m intrigued that the Bears visited Blankenship at the Senior Bowl.

Let’s keep an eye on this situation, just in case Blankenship is just the first of several interviewees this pre-draft season.