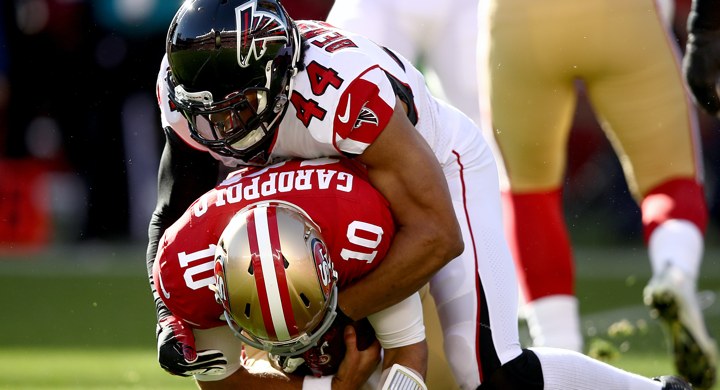 The Atlanta Falcons dropped a weirdly-phrased and oddly-timed tweet on Monday afternoon, but I certainly didn’t mind. They were announcing that the team is parting ways with one of its most productive players, and he could be of serious interest to the Bears.

BREAKING NEWS: We will not pursue negotiations with Vic Beasley this offseason. https://t.co/AWbxv1SiGi

The Falcons are going to allow Beasley, 27, to become a free agent this offseason without pursuing negotiations for a new deal. Atlanta selected Beasley with the eighth overall pick in the 2015 NFL Draft. Or to put it in another light, just one pick after the Bears chose Kevin White with the seventh pick in the same draft.

Beasley missed just two games in his career with the Falcons, racking up 37.5 sacks, 36 tackles-for-loss, and 46 quarterback hits in his five seasons. His best year came in 2016, when he earned first-team All-Pro and Pro Bowl honors as a second-year player. Beasley collected 15.5 sacks, came up with 16 quarterback hits, forced six fumbles, snatched up 11 tackles-for-loss, and even scored a touchdown. That was quite a stat-line for the Clemson product, who despite not reaching those highs since 2016, has since proven to be a steady pass-rushing presence in the NFL.

Improving the pass rush should be a priority for Chicago’s front office, given that having a frightening option to pair on outside, opposite Khalil Mack, could actually improve Mack’s production, too. So with that being said, if they could afford to sign Beasley, he would represent an upgrade at a spot where there’s a need. Because while GM Ryan Pace has previously said he is happy with what Leonard Floyd brings to the table, Floyd has just 18.5 sacks in 54 career games. To put that in perspective, Beasley has 26 quarterback sacks in his last 54 games. As a pass-rushing option, Beasley is likely superior.

Here’s the issue: Chicago is as pressed against the cap as Atlanta is, and the Falcons are (presumably) letting Beasley go because the team isn’t in a position to give him the contract he likely is seeking. So how could the Bears afford him when OverTheCap.com estimates the Bears have just $4,929,361 in available salary cap space? With a little bit of cap manipulation, of course.

The Bears picked up Floyd’s fifth-year option on his rookie deal, which will pay him $13.2 million. But Chicago could rescind the fifth-year option in a move that would cost the Bears no dead money on the cap, while clearing $13,222,000 million in available spending. From there, the team can reallocate some of those funds in a pursuit of Beasley without leaving them entirely inflexible to address other needs.

Chicago will need to be creative this offseason in order to re-position itself as realistic contenders in the NFC. And one way to go about it could be by landing a pass-rusher who could give the Bears a more fearsome front than what it ended with last season.