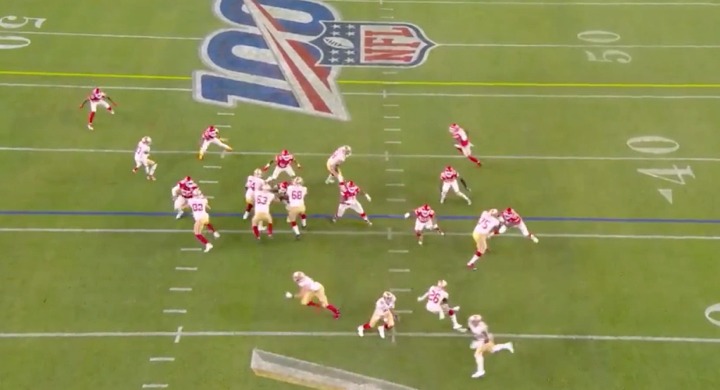 Watching the Super Bowl always leads me to explore how the Bears can reach the height of the two teams playing in the big game.

From a defensive perspective, there’s no doubt the Bears can hang with both the Chiefs and 49ers. But on the other side of the ball, it is clear Chicago has a ways to go before it matches what Kansas City and San Francisco can do when possessing the football. And until the Bears figure it out on offense, the gulf between the haves and the have-nots will remain what it is today (if not, widen).

What makes it all the more frustrating is that watching the 49ers and Chiefs on offense gave me flashbacks to watching the Bears on offense. Which is wild to think about, if only because the Chiefs, 49ers, and Bears are on totally different tiers when breaking down each team’s offensive production. However, many of the concepts and schemes that were on display on Super Bowl Sunday were similar to some things the Bears tried to run during the 2019 regular season. Heck, some of these things were run successfully in 2018.

Embedded below are a handful of plays that probably looked awfully familiar to Bears fans, but actually look better because of the execution that happens at various points of the play’s development.

If I had a dollar for every angry tweet that was spawned after a non-traditional run play called by Bears Head Coach Matt Nagy, I would probably be writing this post from a tropical island. Nagy’s misdirecting runs (with running backs and non-running backs alike) were often the ire of Bears Twitter in 2019, as they weren’t as successful as they had been in 2018. But rather than abandon them in 2020, Chicago’s coaching staff should go back to the lab and figure out how to fix them. Or, at a minimum, analyze how the 49ers used rookie receiver Deebo Samuel as part of their multi-headed rushing attack.

There is so much to like about these concepts:

There are two reasons these plays worked for the 49ers.

(2) The other important thing is that Samuel gets the ball cleanly. There were multiple occasions last year in which the Bears had drawn up a similar play that could have gone for a chunk of yards, but between missed blocking assignments, and flat out not handling the ball, the team was unable to take advantage of the moment. Moments like that make me think about Allen Robinson’s insistence on getting back to being detail-oriented in 2020.

The Chiefs got on the scoreboard with this wonderfully designed throwback:

QB1 gets us on the board! pic.twitter.com/AEbaGOs5Sw

Ahhhh! Now, that is what the option is supposed to look like. Watch how Patrick Mahomes holds the defender long enough to create a running lane for himself to score. Mahomes’ eyes, movements, and fake pitch make it all work. Having a sense of the moment is so important on the option, and Mahomes *CLEARLY* has it. Hence, the scoring play.

Not only are the play call and execution top notch in this situation, but the timing is on the button, too. It’s a goal-to-go situation within a yard of the end zone with a quarterback who has wheels, a running back who is a threat, and possible pass options to account for before the snap. This is far different from when the Bears called for an unsuccessful option on the short side of the field, with an injured quarterback, in the middle of the field. Timing is everything in football, and the Chiefs showed that on Sunday.

Yes, every team has this concept in their playbook. It’s just that the Bears ran it so poorly, it’s easy to forget how it is supposed to look when run properly.

• Mahomes reads the secondary rotation — takes the 1-on-1 (bottom of the screen).

This looks simple on the surface. Play fake, find the one-on-one matchup, then take the shot. But as ESPN analyst Matt Bowen points out, there is more here than meets the eye.

Mahomes has to read the defense on a pre-snap look, execute the play fake, check out the safety rotation, find the area in which it is best to take the shot, then uncork a dime. That’s a lot to handle. And Mahomes did it perfectly, as did Sammy Watkins on a route in which he beat All-Pro corner Richard Sherman.

Remember when Nagy and the Bears unveiled the “I” formation for a hot minute? Fun times.

I hate that the Bears went away from it after showing it could work. Not that I want to go back to 1996 and run an offense out of that formation, but there were plays left on the field that could have been made, but weren’t because the team simply wasn’t prepared to work out of them. Running the ball successfully out of the “I” should have opened up possibilities for play action passes and some of the other gadgetry Nagy liked to show every now and again. But it didn’t happen. What a shame, too. Because it seems as if Kyle Shanahan has provided a blueprint for Nagy to follow on how to properly use the “I” formation (as well s a fullback.

These are the types of concepts that should have been installed when the Bears were running things out of the “I” last season:

Red zone boot (w/ Juszczyk aligned as a wing) + this one out of an I backfield set.

The Bears probably don’t need a traditional fullback in order to install these particular concepts. They used J.P. Holtz in similar situations last year. And when Holtz was in on the action, he executed. No, he isn’t a TE1, and shouldn’t be on a team with postseason aspirations. But he doesn’t need to be if he is used properly within the offense.