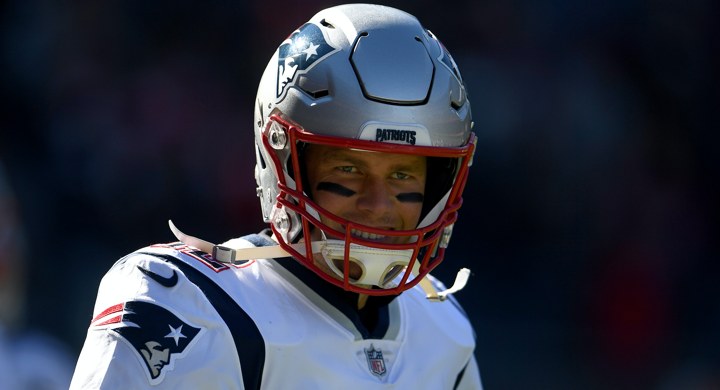 ESPN has rolled out a fun new graphic, which acts as a choose-your-own-adventure page, featuring premier NFL free agents as the moving pieces and this offseason as the setting.

Using this tool, NFL writer Bill Barnwell presents scenarios for eight of the league’s top free agents and destinations, then follows up with the domino effect for each of their signings. It’s a unique idea, presentation, and layout that I think you should check out to get your offseason buzz building.

But it also presents something that I can classify only as not 100% crazy. Call it like 97% crazy. So take that as you will (if you clicked over, you already know where this goes).

As soon as you get to the page, you’re met with a jarring image of Tom Brady wearing a navy blue Chicago Bears jersey with a white No. 12 trimmed in orange. It’s a predicted scenario from Barnwell, which sees Brady signing with Chicago and ushering a chain of changes in the Bears’ quarterback room. Well, then.

Obviously, this isn’t a particularly likely outcome for about a million reasons, but let’s at least go through the steps to see why it’s not *completely* out of the question (and how it would actually work).

To get started, I’d like to remind you to ignore the big numbers in any NFL contract, particularly this one. Barnwell might have typed “four-years, $110 million,” but Brady’s deal would effectively amount to a one-year contract worth $35 million, with three voidable years at the end.

As for the other three years and $75 million on the contract, Brady and the Bears can cross that bridge when they get there. But in the meantime, the focus would be on maximizing on the competitive window Chicago opened up in 2018.

On the surface, Brady and the Bears makes some sense. Watching him take over an offense that prioritizes getting the ball out quickly and accurately (two things Brady does well) and marrying it to a defense that ranked in the top 10 in scoring, yardage and DVOA lsat year sounds ideal. The Bears would still need to bolster some spots on the roster, and would have to do it with limited cap funds. But I suppose that’s the price to pay in order to acquire the waning years of the G.O.A.T. slinging it at Soldier Field.

Step 2: Trade Leonard Floyd to the Giants for a Sixth-Round Pick

The Bears need to create cap space in order to make this hypothetical scenario a reality, which brings us to Barnwell’s next domino: sending Leonard Floyd to the New York Giants for a sixth-round pick.

Floyd is scheduled to make $13.2 million on the fifth-year option of his rookie deal. Trading him would mean giving up on a former top-10 pick, who hasn’t become the sack artist many envisioned, and would create the need to land a pass-rusher in the draft. Thankfully, the Bears have two second-round picks — one of which could be used to draft Floyd’s replacement.

The Giants were keen on Floyd and reportedly had their hearts set on drafting him until the Bears leap-frogged them on draft day. So maybe this trade scenario makes more sense than we would otherwise think.

Step 3: Trade Mitch Trubisky to the Dolphins for Josh Rosen

I can’t imagine a scenario where the Bears carry Tom Brady and Mitch Trubisky on the same roster – and neither does Barnwell, who has the team declining the fifth-year option on Trubisky, then sending him (along with a seventh-round pick) to the Miami Dolphins in exchange for quarterback Josh Rosen.

Should this come true, it would mark the third team in as many years for Rosen, who was a top-tier prospect coming out of UCLA, but hasn’t made much of his limited opportunities. Rosen spending the final two years of his rookie deal (with cap numbers of $2.079M and $2.879M) as a backup learning behind Brady might be a more appealing scenario than dealing with the awkwardness of Trubisky losing his gig and sitting the final year of his rookie deal behind Brady (all while making $7 million more than Rosen).

Swapping Trubisky’s cap number ($9,237,539) for that of Rosen’s ($2,079,796) creates $7,157,774 in cap space. Tack on the removal Floyd’s deal, and the Bears would be looking at Chicago having $25,399,104 in cap space. Clearly, there would still be a need to get some more work done to fit Brady’s deal and whatever else the Bears needed to add in the offseason. And while this constitutes a start in the right direction should the team insist Brady is the short-term answer to its quarterback dilemma, it will also leave the Bears in an unenviable cap situation. It’s quite the hurdle, to say the least.

Barnwell’s Bears scenario has domino effects around the league. Because after Brady goes to Chicago, Barnwell has New England trading a third-round pick to Carolina for Cam Newton. From there, Marcus Mariota signs a two-year deal worth $18 million with the Panthers to provide a new-look franchise with a quarterback considered a low-end starter or high-end backup. And finally, this scenario wraps up with Teddy Bridgewater signing a four-year deal worth $120 million with the Colts.

But it’s the Bears stuff that’s most juicy and pertinent to us, and kinda crazy. Should you want to explore more scenarios, then be my guest. We’ve got plenty of time until the action period of the offseason takes place.