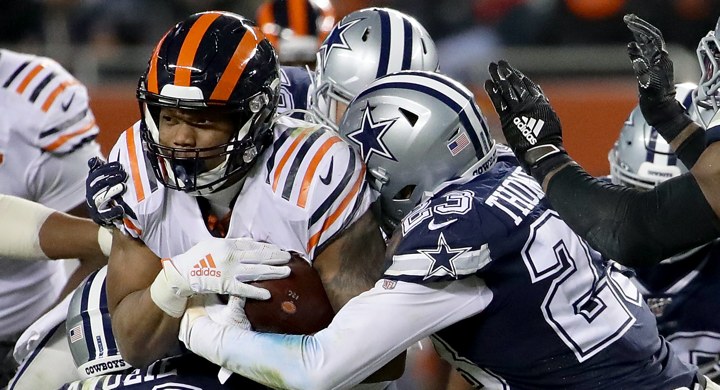 The Bears have no outgoing free agent running backs.

There isn’t much fat to cut from the running backs room. So if you were hoping there was a place to trim salary that could be reallocated elsewhere, I’m sorry to be the bearer of bad news. Cutting Cohen would open up $1.634M in cap space. That’s not nearly enough of a savings to seriously consider cutting him. Technically, there is $75,000 that could be saved if the Bears cut Nall. But I can’t even begin to find the point in doing that for the sake of saving money.

Improving the running backs room is one of those needs that doesn’t stand out as much as positions like quarterback or on the offensive line, but let’s not overlook the importance of getting this position correct. The 49ers and Chiefs used multiple backs within their scheme, while also utilizing receivers on jet sweeps, end arounds, and other run option plays. Increasing versatility out of the backfield should be viewed high on the priority list, even if it falls behind other positions.

The Bears don’t have a ton of salary cap space to invest in a running back. But even if they did, I’d advise against it. And it’s not as if they are in a position to draft an impact back with one of their second-round picks. So where does that leave GM Ryan Pace to go? Late-round running backs and undrafted free agents always reveal themselves as viable rushing options. Chicago isn’t looking for a feature back because Montgomery performed well as a rookie (1,074 scrimmage yards, 7 total TD) and is under contract for the next three years. There is no pressure to land a back until the tail end of the draft or sign a priority free agent after the draft ends.

It is clear that Montgomery and Cohen can’t be the only options if the Bears are to build a successful backfield. It would be nice for someone to fill the Mike Davis role was supposed to play in, preferably without spending a chunk of change in free agency. In the end, finding a fit in a back whose presence can give Montgomery a breather and allow Matt Nagy to use Cohen in a more efficient (and impactful) manner should be high on the do-do list for Pace this offseason.