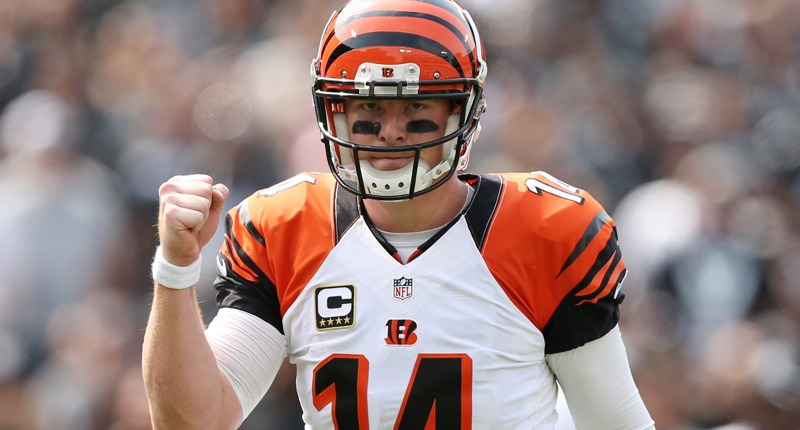 An offseason of quarterback change and shuffling is starting to come into focus, with the latest buzz coming from NFL Network insider Ian Rapoport sharing what he has heard regarding the latest out of Cincinnati — a team seemingly on the cusp of shaking things up.

From NFL Now: The #Bengals are willing to work with QB Andy Dalton on a trade, I'm told, a plan that has been communicated to him. This meshes with what exec Duke Tobin told me a few weeks ago that when decisions happen, "I'll be in contact with him." (https://t.co/rrfjo3eYy9) pic.twitter.com/WPr3gb65rV

Rapoport reports the Bengals are willing to work with quarterback Andy Dalton in order to facilitate a trade out of Cincinnati. There are no specifics as to what the timetable will be, other than Rapoport mentioning it will happen “when the time is right.”

Back in January, Bengals Director of Player Personnel Duke Tobin spoke with Rapoport on his podcast and was complimentary of Dalton saying: “He’s got a lot of talent, he’s got a lot of leadership,” Tobin said. “We have the utmost respect and high regard for Andy Dalton and we don’t believe by a long stretch that his career is over.” As was mentioned in this particular edition of Obsessive QB Watch, Tobin came off sounding like an executive who was curious as to if he could create a trade market for a quarterback entering the final year of a contract that comes with a $17.5 million base salary for 2020. Playing up that Dalton still has something left in the tank, then following it up with a willingness to facilitate a trade is the strategy the Bengals are going with in their search to jettison Dalton’s deal ahead of drafting LSU’s Joe Burrow with the first overall pick. I can respect that.

Between the Bears’ needs at the position and Dalton’s link to new Offensive Coordinator Bill Lazor, there are reasons to keep tabs on this situation. That Dalton has already been connected to the Chicago Bears on multiple occasions this offseason makes the latest rumors of Cincinnati’s openness to working with the three-time Pro Bowl quarterback in coming up with a trade gives us more reasons to share. If anything, word that the Bengals are willing to work with Dalton on getting a deal done should nudge the Bears toward throwing their hat in the ring and getting something done (that is, of course, if they view adding Dalton as a high priority).

Perhaps jumping the market would allow an inquiring team to net a draft pick as compensation for taking on Dalton’s salary. And getting Dalton in the building could be a first step toward re-working his contract in a way that would lower the cap hit connected to the deal by adding more years to it. No, Dalton isn’t the sexiest name among the available quarterbacks. But his availability sure is fascinating.

Getting ahead of a quarterback market that is fixing to include Tom Brady, Philip Rivers, Teddy Bridgewater, Marcus Mariota, and others seems like a wise strategy for Cincinnati, as well as teams who could have an interest in acquiringDalton. Otherwise, the Bengals could be left with an asset no one will be seeking if they fill their veteran quarterbacking needs via other avenues. While teams could be left battling multiple teams for Dalton’s services instead of negotiating with one. So, yeah, smart move by the Bengals to get out in front of this. Let’s see what the next domino to fall looks like as we move along.