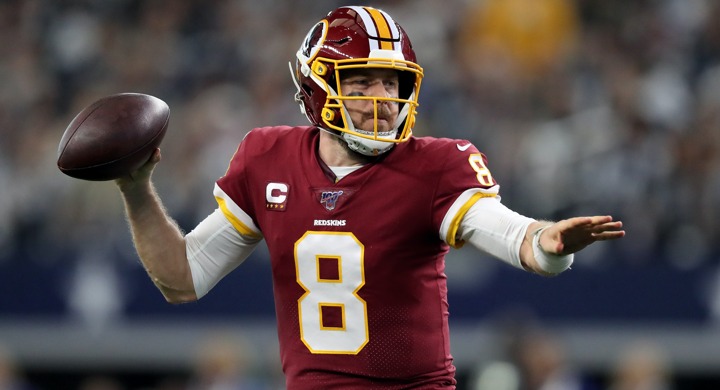 There’s no way to land this softly, so here goes nothing.

The NFL QB Index put together by NFL.com’s Ali Bhanpuri, Tom Blair, Gennaro Filice, and Dan Parr ranks the league’s best players at the game’s most important position … and they aren’t kind to Mitch Trubisky. Chicago’s QB1 is tied for 30th in a ranking of the 57 signal callers who started at least one game in the 2019 season. To really drive home how poorly Trubisky rates, no quarterback who made as many starts ranks below him, while just three quarterbacks who started at least 10 games check in below Trubisky in the rankings. Ouch.

In short, Trubisky is in a rough spot three years into his career. This isn’t to say he can’t make improvements, tidy up his mistakes, cut down on the things that cause him to slip up, and do work en route to righting the ship. It’s just that there is clearly some heavy lifting that needs to be done to get to that point.

There is a belief that one way to guide Trubisky toward better days is to push him with in-house competition. Perhaps having legitimate competition behind Trubisky on the depth chart for training camp and the preseason could sharpen him up ahead of a pivotal season for him and his future with the franchise. But while scrolling through the quarterback power rankings, I came to realize that several potential options who could hit the market don’t seem much better than what the Bears have with their current QB1.

Unrestricted free agents Case Keenum (34th) and Marcus Mariota (35th) are behind Trubisky in the power rankings. So are rumored trade targets Nick Foles (39th) and Cam Newton (40th). Josh Rosen (52nd) was a top-10 pick in the 2018 NFL Draft who could join his third team in as many years this offseason, and he checks in among the 10 worst at the position in 2019. Even Andy Dalton – whom the Bengals are reportedly open toward trading this offseason – is tied for 30th with Trubisky. None of this is encouraging if you’re banking on a better option just waiting to be snagged by the Bears.

With that being said, there are players who (based on these power rankings) represent a clear upgrade at the position. Tom Brady (14), Teddy Bridgewater (19), Philip Rivers (21), and Jameis Winston (22) are unrestricted free agents who would rank (at least) a tier a head of where Trubisky checks in. But before you think about bringing any of those guys in, think about the hurdles that need to be cleared before they were to come into the picture.

Brady and Rivers have age-related decline concerns and will almost certainly command top dollar. Bridgewater might be a more affordable starting option, but let’s not look past the fact he hasn’t been a full-time starter since 2015. Winston’s turnover rate is alarming and could be a cause for a concern for a team whose identity is rooted in defense and ball control. Are each of those players upgrades? Sure, I’m willing to concede that argument. But are they without red flags? Hardly.

The Bears are positioned to bring two new quarterbacks to Halas Hall this offseason, but it is evident there are no perfect solutions. Should Chicago dive into free agency to fix its quarterback issue, it should do so with the goal of bringing a clear-cut improvement to the room. Otherwise, settling for something other than an upgrade at the most important position in the game during what the franchise believes is a window of contention would be a mistake.