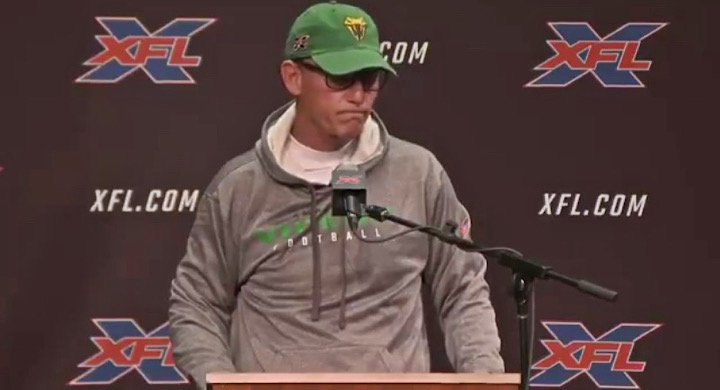 Things aren’t going well for Marc Trestman in the XFL.

The former Chicago Bears head coach is at the helm of the Tampa Bay Vipers, who have stumbled out of the gate. Trestman’s team is winless in its first two games and has yet to score an offensive touchdown. This is probably jarring to fans who didn’t previously experience this ineptitude during his time in Chicago. But for Bears fans, this is old hat. And to further complicate things, his locker room presence continues to be less than inspiring.

Back to the lab to become the team we know we can be. pic.twitter.com/OtHSRMxSH8

If you didn’t doze off during this, then more power to you. I need a fresh cup of coffee to get through the rest of this post after watching that.

This is what it looks like when the offensive output is less than impressive.

This is what it sounds like when speeches are the antithesis of motivational.

This is the XFL with Marc Trestman.

Frankly, it’s not all that different than his tenure as an NFL head coach. It even comes with highly questionable coaching decisions:

4th down, trailing by 5, less than 3 minutes left.

At least things aren’t going awful for the league as a whole. The in-game interviews, broadcast innovations, and unparalleled access to things you’re not accustomed to seeing in other football games remains interesting. How the league continues to grow in the early stages of its re-boot will be worth following.

As for Trestman? Ehhhh … not so much. Especially not with an offense that doesn’t score and hype speeches that make you sleepy. But hey, maybe Trestman’s team can get it re-started and headed in the right direction at home!

Gosh, now where have I heard that one before?